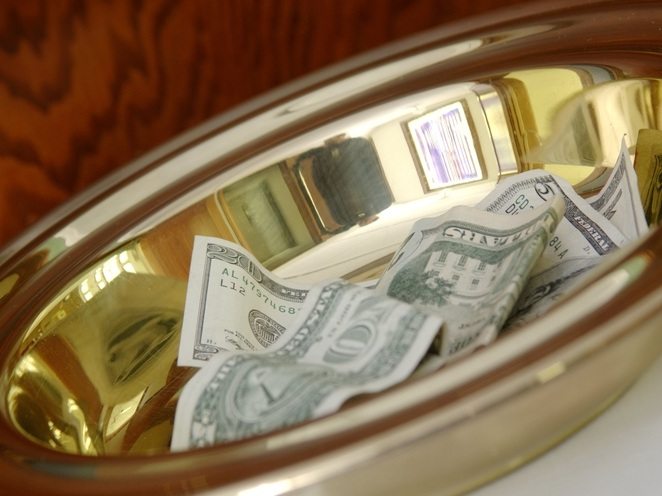 How did a 91-page report from the Evangelical Council for Financial Accountability (ECFA) on new measures for the financial accountability of nonprofit religious institutions pass by the press with so little coverage? If you recall, the report sprang from a multiyear investigation, commissioned by Sen. Charles Grassley (R-Iowa), of some controversial and well-heeled televangelists, including Benny Hinn, Kenneth Copeland, Creflo Dollar, Eddie Long, and Joyce Meyer. That process ended with the surprising result of Grassley turning the entire subject over to an expert panel convened by the ECFA. The ECFA report is a well-crafted and ultimately disappointing argument for self-regulation—or even something less. At its core, the ECFA report suggests that the accountability of religious institutions large and small should be a fundamental responsibility of the donors.

As the chairman of the panel wrote in his opening letter of the report, the missing element in the national dialogue around self-regulation is donor engagement: “Donors have a duty to appropriately engage in the giving process and to make informed giving decisions. When donors engage, the organizations they support tend to have a higher level of interest in self-regulation and accountability.”

Its formal recommendation on the subject reads:

“Financial supporters (donors) of religious or other nonprofit organizations should be appropriately engaged in the process and should take the necessary actions to make informed giving decisions. A donor should seek or request from a church such information about its financial and other activities as the donor believes appropriate. A donor should evaluate the information available about a church’s activities and/or its response, or lack of response, to requests for information in making a wise giving decision. Put simply, our message to donors is ‘Know the organizations you support.’”

Let’s remember the dimensions here. Giving USA’s latest report says that individual giving in 2011 was $298.42 billion, of which $95.88 billion went to religion, roughly one-third of all charitable giving. How much of individual giving goes to churches and religious charities together? One source suggests that the proportion might be as high as 72 percent. To expect those millions of donors to exercise the kind of influence and control over the likes of Kenneth Copeland and Eddie Long to ensure that they play on the up and up is hard to fathom. It is why we have an Internal Revenue Service (IRS) to deal with monitoring charities, despite their legions of donors. It’s the same reason why you can’t supplant government oversight and monitoring with the due diligence of individual donors spurring Meyer and Dollar to self-regulate.

The ECFA offers a spirited defense against requiring religious institutions to file full form 990s (other than the 990-Ts for unrelated business income) or even the inconsequential 990 e-postcards. There is a fear of government entanglement and intrusion and the fear that a small requirement for even an e-postcard might grow and metastasize. Yet the government entanglement is built in to churches’ eligibility for tax-deductible charitable donations.

We remember an Independent Sector “listening session” during the Nonprofit Panel days when the IS person on the dais asked the assemblage whether religious organizations should be required to file 990s. The answer was an all-but-unanimous “yes,” but the IS rep said that it would be politically difficult to do. Without 990s—without a basic level of automatic, publicly required transparency—churches pose difficult challenges for diligent donors as well as for the few watchdogs tracking the accountability of religious institutions for their tax-protected charitable receipts.

In line with the defensive reaction of nonprofits to the prospect of increased regulations due to Grassley’s charitable accountability hearings nearly a decade ago, the ECFA says that the laws on the books are just fine. All the IRS needs to do is enforce them. Wrong on both counts. Grassley’s charge to the ECFA recommended the repeal of the “rebuttable presumption” on executive compensation, but the ECFA report offers a tortured rationale about the benefits of confidential salary compensation studies. Rely on the IRS? The short-staffed, underfunded IRS is hardly prepared to do much as it is, especially with the prospect of having to absorb a major role in the oversight of the Affordable Care Act. Further, the IRS has already passed on oversight of nonprofits and churches violating the prohibition against partisan electoral activity.

While well meant, the ECFA report is a step backward in effective oversight of the more than one million charitable and religious entities that receive and steward charitable contributions.—Rick Cohen