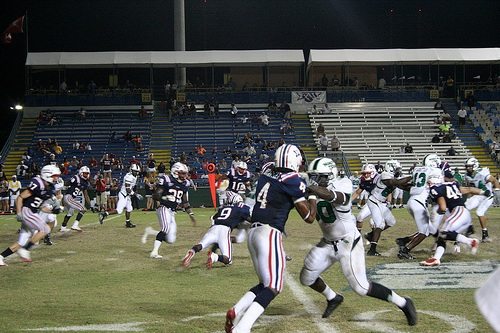 Naming things after donors can be awkward at times if, for instance, they become tainted after the building has been up glorifying their name for some time, linking their brand with your own. There are a number of instances where this has occurred, as the NPQ article “When a Donor Becomes Tainted” details. In other instances, some have had the foresight to block a naming where the donor’s character is already in question. Still, the lure of big money is like a siren song.

So is it really that surprising to know that Florida Atlantic University is planning to rename its football stadium the GEO Group Stadium? The GEO Group runs private prisons. Is this a good brand move? Does nobody consider it odd that you have one institution dedicated to education of young people benefitting from institutions that imprison thousands of others? GEO makes most of its money running state and federal prisons and detention centers for immigrants.

Paul Swangard at the University of Oregon Warsaw Sports Marketing Center isn’t taken with the concept, calling it “a marketing strategy that doesn’t make an sense.” But beyond marketing, Bob Libal of Grassroots Leadership points out that GEO has put “enormous resources” into taking over a big chunk of the Florida Prison System and that this move may be a piece of its rebranding strategy in that effort. Libal comments, “It’s like calling something Blackwater Stadium. This is a company whose record is marred by human rights abuses, by lawsuits, by unnecessary deaths of people in their custody and a whole series of incidents that really call into question their ability to successfully manage a prison facility.” –Ruth McCambridge