Editors’ note: This article is from NPQ‘s new, spring 2015 edition, “Inequality’s Tipping Point and the Pivotal Role of Nonprofits,” and was originally published by the Urban Institute in February 2015. The charts were designed to be interactive. Please visit the Urban Institute’s website in order to access this feature.

Why hasn’t wealth inequality improved over the past fifty years? And why, in particular, has the racial wealth gap not closed? These nine charts illustrate how income inequality, earnings gaps, homeownership rates, retirement savings, student loan debt, and lopsided asset-building subsidies have contributed to these growing wealth disparities.

Average wealth has increased over the past fifty years, but it has not grown equally for all groups. Between 1963 and 2013:

2. One reason for rising wealth inequality is income inequality.

Income is money coming into a family, while wealth is a family’s assets—things like savings, real estate, businesses—minus debt.2 Both are important sides of families’ financial security, but wealth cushions families against emergencies and gives them the means to move up the economic ladder. Also, wealth disparities are much greater than income disparities: three times as much by one measure.

Income inequality can worsen wealth inequality because the income people have available to save and invest matters.3 Focusing on private income, such as earnings and dividends, plus cash government benefits, we see that families near the top had a 70 percent increase in income from 1963 to 2013, while the income of families at the bottom stayed roughly the same.4

Median wealth by race and ethnicity is lower than average wealth, but the trends stay the same (see figure 3). Both measures are important because average wealth indicates how a group is prospering as a whole relative to other groups, while median wealth shows how the “typical” family is doing. 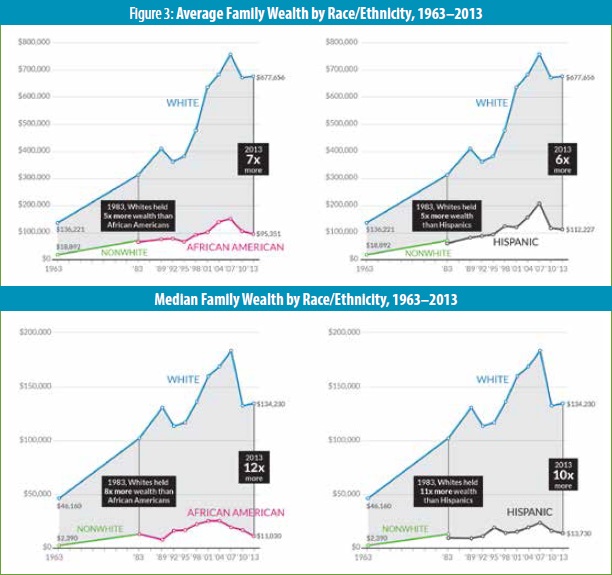 Sources: Survey of Financial Characteristics of Consumers 1962 (December 31), Survey of Changes in Family Finances 1963, and Survey of Consumer Finances 1983–2013.
Notes: 2013 dollars. No comparable data are available between 1963 and 1983. African-American/Hispanic distinction within nonwhite population available only in 1983 and later.

Median wealth by race is lower. Though the dollar gap grows with age, the ratio doesn’t grow in the same way: whites have seven times more median wealth than African Americans in their thirties and in their sixties. 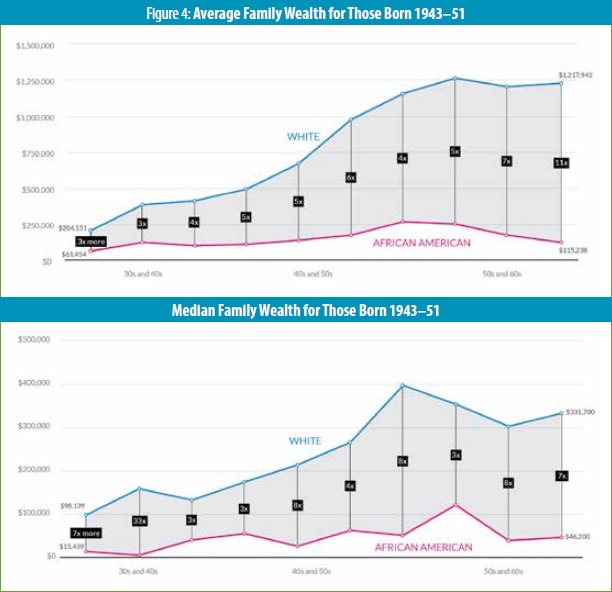 5. Differences in earnings add up over a lifetime and widen the racial wealth gap.

Why is the racial wealth gap so big? People with lower earnings may have a harder time saving. The typical white person earns $2 million over a lifetime, while the typical African American earns $1.5 million and the typical Hispanic person earns $1 million. These disparities partly reflect historical racial disadvantages that continue to affect later generations. 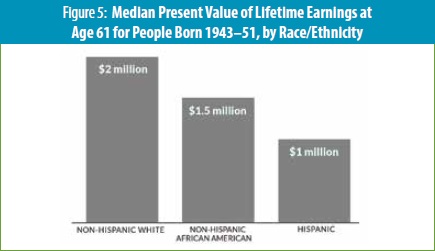 6. African Americans and Hispanics lag behind on major wealth-building measures, like homeownership.

African Americans and Hispanics are less likely to own homes and have less in liquid retirement savings, so they more often miss out on these powerful wealth-building tools. Homeownership, in particular, makes the most of automatic payments—homeowners must make mortgage payments every month—to build equity.

In 1983, 68 percent of white families owned their home, compared with 45 percent of African-American families and 41 percent of Hispanic families. By 2013, the racial homeownership gap improved slightly for Hispanics, but it grew worse for African Americans. African Americans and Hispanics were also less likely to own homes than whites at the same income level.

7. African-American and Hispanic families have less in liquid retirement savings.

In 2013, white families had over $100,000 more (or seven to eleven times more) in average liquid retirement savings than African-American and Hispanic families. In sheer dollar terms, this disparity quadrupled over the past quarter-century: in 1989, white families had $25,000 more (or five times more) in average retirement savings than African-American and Hispanic families. This gap is becoming more important as liquid retirement savings vehicles, like 401(k)s, replace more traditional defined-benefit pension plans.

Why does this gap exist? It’s not just income differences; even at the same income level, gaps remain. African-American and Hispanic families have slightly less access to retirement saving vehicles and lower participation when they have access. But lower access and participation isn’t the full story. Hispanic workers are less likely to participate in employer retirement plans than African-American workers but have similar average liquid retirement savings. This suggests that simply having more employers offer retirement plans will not be enough to close the gap, especially if lower-income groups contribute smaller portions of their income to retirement plans and have a greater likelihood of withdrawing money early to cover financial emergencies. Lower-income families may also get lower returns on average if they invest in safer, more short-term assets. 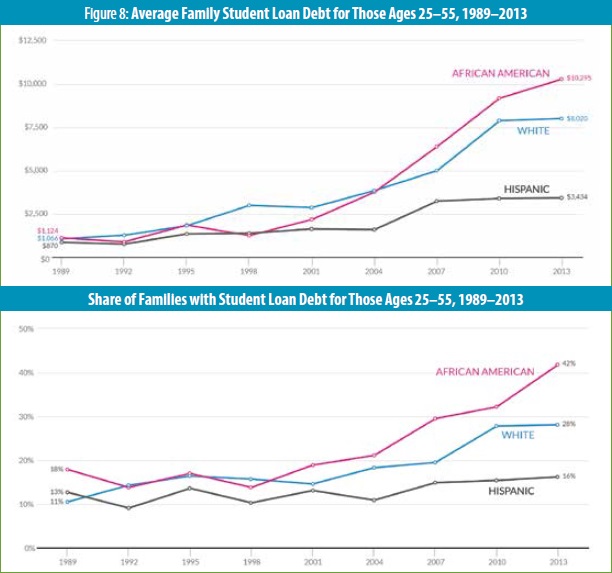 Since the mid-2000s, African-American families, on average, have carried more student loan debt than white families. This is driven in large part by the growing share of African-American families that take on student debt. In 2013, 42 percent of African Americans ages twenty-five to fifty-five had student loan debt, compared with 28 percent of whites.

However, African Americans also have lower graduation rates than whites, and people of color disproportionately attend for-profit schools, which have low graduation rates.6 This means that student loan debt doesn’t always translate into a degree that would promote economic mobility—and income and wealth—in the long run.

Low-income families benefit from safety net programs, such as food stamps and welfare, but most of these programs focus on income—keeping families afloat today—and do not encourage wealth building and economic mobility in the long run. What’s more, many programs discourage saving: for instance, when families won’t qualify for benefits if they have a few thousand dollars in assets or when they have to give up rent subsidies to own a home.

By more efficiently and equitably promoting saving and asset building, more people may have the tools to protect their families in tough times and invest in themselves and their children.

The nonprofit Urban Institute is dedicated to elevating the debate on social and economic policy. This interactive was funded by the Ford Foundation, with additional support from the Annie E. Casey Foundation. Funders do not determine research findings or influence scholars’ conclusions. The team thanks Melissa Favreault and Karen Smith for special tabulations, Taz George for assistance with the homeownership series, and Opportunity and Ownership seminar participants for helpful comments. The views expressed are those of the authors and should not be attributed to the Urban Institute, its trustees, or its funders. © Urban Institute, February 2015.

Signe-Mary McKernan is a Senior Fellow in the Center on Labor, Human Services & Population at the Urban Institute.

Caroline Ratcliffe is a Senior Fellow in the Center on Labor, Human Services & Population at the Urban Institute.

C. Eugene Steuerle is Richard B. Fisher chair and Institute Fellow at the Urban Institute.