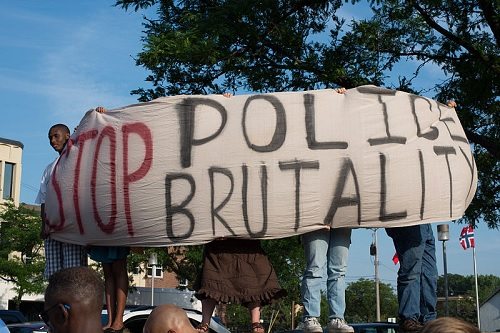 With data from a nonprofit called Fatal Encounters (created by D. Brian Burghart, the editor/publisher of the Reno News & Review, to document how, when, and where people died in encounters with policy), Anand Katakam created an interactive map of at least 3,100 people killed by police since 2000. The map notes not only the killings, but the causes and circumstances of death, including gunshots (the most common by far), Taser, medical emergency, asphyxiation, beatings, stabbings, being run over by vehicles, and even being dropped from heights.

According to Vox, Burghart believes that his Fatal Encounters database, based on reports from the public, the media, and the FBI, captures only about 20 percent of the actual number of police killings. The FBI doesn’t mandate reporting on policy killings, and even when data is received, the information often doesn’t identify the manner of homicides. As we have noted, in his response to the Ferguson grand jury’s non-indictment of Officer Darren Wilson, President Obama could have simply made the full reporting of police killings a mandatory part of local and state law enforcement reporting to the FBI, but for some reason, he declined to do so.

What the Fatal Encounters database reveals, even with its data limitations, is a disturbingly large number of police killings. The deaths of Tamir Rice in Ohio, Michael Brown in Missouri, and Eric Garner in New York are not anomalies. If the database had another data field—how incredibly few of these killings resulted in indictments of the police officer or officers involved—the result would be doubly shocking. If the pattern is always one of police killings followed up by official inaction, there is little wonder that for blacks and Latinos (black teens are 21 times more likely to be killed by police than white teens, according to FBI data, as limited as it is), distrust of police is high. According again to limited FBI data, while blacks are 13 percent of the U.S population, they are 31 percent of the people killed by police during arrests.

The issue of police killings, prompted recently by the deaths of Michael Brown and Eric Garner, is not going away. It’s time for governmental authorities to act, with a first and logical step being the removal from local prosecutors of the responsibility of bringing indictments of police officers, shifting that responsibility to state (as done by Governor Scott Walker in Wisconsin) or federal officials. Otherwise, the string of dubious determinations made by grand juries about police killings will continue—not because of the grand juries, but because of the information presented to them by local prosecutors who are generally too close to the police who need to be brought to trial.—Rick Cohen