A Community Rises in a Historic Albuquerque Neighborhood 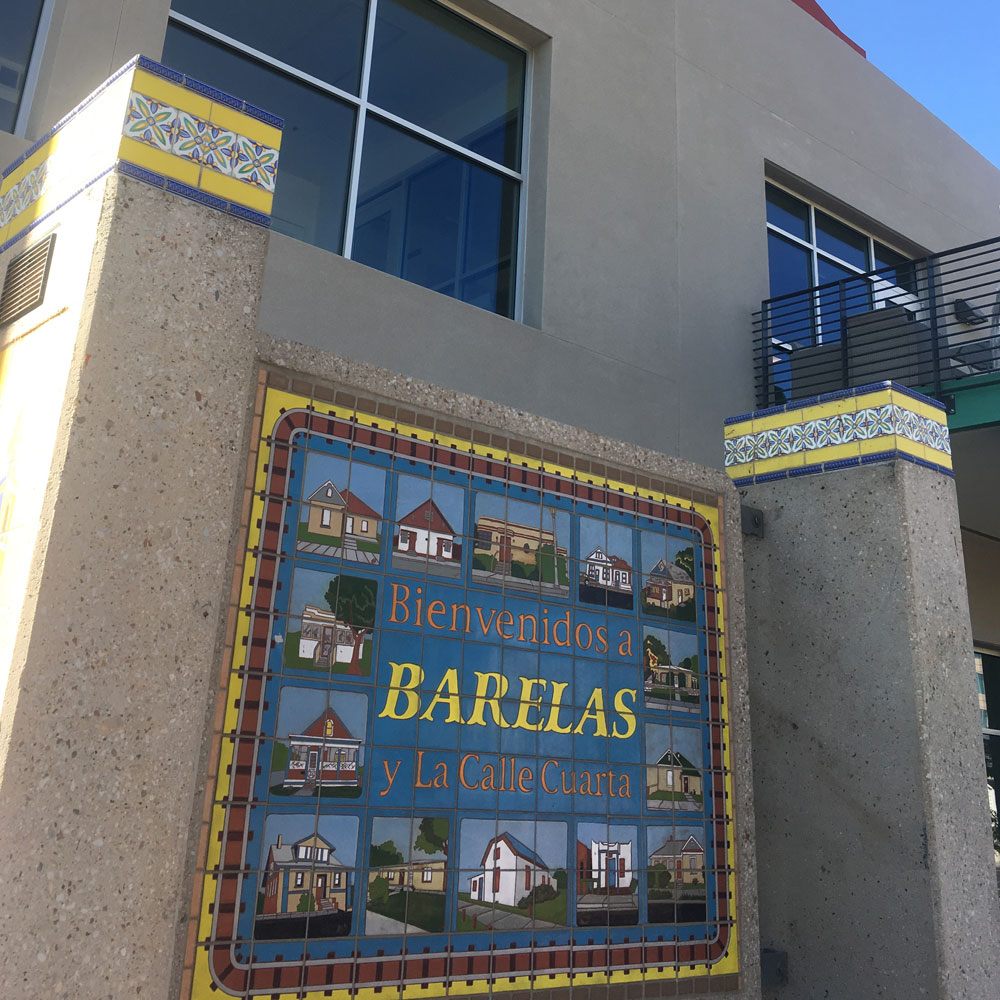 A week from today, NPQ launches the second “season” of our Remaking the Economy webinar series. Each webinar will focus on a specific region or community. Next Thursday’s webinar, held from 2 to 3:30 pm Eastern Time, will focus on New Mexico—one of many places where residents are building a more inclusive and democratic economy within the shell of our highly unequal economic system. For this webinar, we will feature Three Sisters Kitchen (mentioned briefly below), an emerging statewide co-op development network, and the ARTZ Cooperative, a cooperative effort of Zuni Pueblo artisans. Please register for the free webinar here.

Once a vibrant corner on the historic Camino Real (Royal Road) in Albuquerque’s Barelas neighborhood, 4th and Coal has become an eyesore in recent decades. Barelas, a community founded by Spanish colonizers in 1662, fell on hard times in the 1960s and 1970s. So-called “urban renewal,” which in this case included the rerouting of what had once been the neighborhood’s main commercial corridor and the construction of a major freeway dividing surrounding neighborhoods and social networks, has had a truly devastating impact, especially when combined with the closure of the district’s main employer, known as the Rail Yards. But the neighborhood has never lost its fighting spirit—and it is now on the rebound.

In 2010, Ron Romero, a Barelas resident and longtime activist, helped launch the Barelas Community Coalition (BCC) as a 501c3 nonprofit. BCC provided a central hub to organize community-based efforts to reimagine Barelas and has been the lead nonprofit driver behind the community-rebuilding effort. BCC works to ensure community influence over decisions surrounding the neighborhood. BCC’s mission is to avoid displacement while improving the quality of life for Barelas-based families, businesses, and organizations.

In 2013, prodded by BCC, then-Mayor R.J. Berry agreed to task city officials with helping to redevelop the vacant corner that served as the gateway to the historic neighborhood. With mayoral support, which has remained steadfast under current Mayor Tim Keller, and with help from local city councilor Ike Benton, a community-driven process has emerged that is both reshaping and rebuilding the neighborhood.

BCC members knew what they wanted. That said, financial viability posed a challenge. BCC envisioned a mixed-use project that would include housing and local retail. Given its location south of downtown and the stagnant local economy, making the project work would require finding a developer who was willing to take a chance.

In the end, after the city sent a request-for-proposal document out for bids, BCC supported a proposal advanced by local developer Sean Gilligan and Richard Yates, a Santa Fe-based architect and developer. After several years of public input, design changes, and funding proposals, ground was broken in April 2018. A grand opening is slated for next month.

The name La Esquinita (“The Little Corner”) emerged through a community naming process. Leaders in Barelas anticipate that the new retail food, arts, and cultural business incubator will promote new partnerships and serve as a cultural and economic hub for the community.

La Esquinita Marketplace and Incubator will include a small food hall/business incubator, an artisan market, and the city’s first official food truck park. The $4.5 million mixed-used project includes three separate structures, ranging from one to three stories. The residential component will comprise 14,000 square feet, with 21 market-rate apartments (including studio, one-, two-, and three-bedroom units), two secure rooftop decks for residents and guests, on-site and in-unit laundry facilities, a second-floor gym, and a communal lobby area with workstations.

La Esquinita will draw together community members, public and private partners, and community organizations to address the need for a “leaving the nest” space for early entrepreneurs who are ready to take the next step in growing their businesses. It increases the inclusivity of the business community by drawing in many types of ventures and provides a space for business founders with limited capital to flourish in a shared environment, pooling resources to help level the economic playing field. There is a specific focus on entrepreneurs of color, including immigrants.

La Esquinita will also contribute to the stabilization of the Barelas neighborhood by anchoring businesses that provide food, shopping, arts, events, and culture in a walkable area that also leads to other attractions such as the Rail Yards Market and the National Hispanic Cultural Center. The project contributes to a vibrant downtown corridor. It might even help Albuquerque attract more tourist dollars by adding a new amenity to the city’s downtown that provides “adventure steeped in culture,” as well as cultural events and programming.

“Barelas is in the beginning of another renacimiento (rebirth),” says Cristina Rogers, the Main Street manager for BCC. “We are hoping the community will come together to make this a special place for local residents and the neighborhoods surrounding downtown.”

Providing training, business development, technical assistance, and subsidized storefront space for food-, art- or culture-related business startups, La Esquinita aims to satisfy some of the shopping needs of the Barelas community while catalyzing redevelopment. La Esquinita will help startup and growing small retail businesses and provide entrepreneurs with the expertise, networks, and tools they need to help make their ventures more successful. The incubation program will also help shield new retail businesses from the harsh environment they face during the first year of existence—the most critical period.

“La Esquinita is a powerful example of what is possible when a community comes together and perseveres despite all odds,” explains Alejandro Saavedra, who chairs the BCC board. “We are building on the years of work that so many members of this resilient community have seeded.”

While La Esquinita won’t work miracles, it will certainly increase the odds for business startup success in the local Chicanx/Latinx community. Most startups are short of everything but the founder’s energy and passion. La Esquinita plans to build on that spirit while cushioning the demands by helping startup businesses acquire the skills and services that they lack.

Small retail incubators like La Esquinita are proven tools for creating jobs and starting new businesses. La Esquinita graduates will have the opportunity to move on to occupy commercial space within the Main Street corridor along South 4th Street in Barelas, or in the surrounding downtown and neighborhoods.

The facility will provide flexible space for five companies in its first year, and 10 companies by year three, at a rent that is below average for the area. Shared equipment and services that would otherwise be unavailable or unaffordable are provided to help businesses cut costs. These are complemented by existing commissary kitchens and like resources. The incubation/training program is also open to an additional 15 non-resident companies through an affiliate model.

Outreach to prospective businesses has preceded the anticipated opening of the business incubator. Recruiting began well in advance of the availability of space, through a fully bilingual and inclusive process. By jointly managing marketing, training, and services, La Esquinita aims to boost local food, arts, and cultural businesses.

After proving their concept in the incubator, businesses will have an opportunity to occupy larger spaces at the La Esquinita Marketplace, the Rail Yards Market, or other properties on 4th Street. Project organizers plan to work with a wide range of local training partners, including Three Sisters Kitchen, which will be featured on next Thursday’s NPQ webinar.

Part of the incubator model involves providing a coordinated curriculum that includes financial, management, food safety, marketing, and other support and training. Matt Fuemmeler, a local food business leader with deep roots in Albuquerque, will be the team’s operations manager.

This project has been a long time in the making and may help inform communities across the nation that are facing similar challenges. Certainly, there are many lessons in community building that can be taken from the Barelas community, including the imperative to develop a long-term vision, the importance of persistence, as well as the need to recruit many partners, including politicians and businesses, in order to succeed. It is, in fact, quite difficult to bring projects like this to fruition. And such work always involves building on past achievements—in short, standing on the shoulders of many current and former community leaders.

Of course, while it took many years of hard work and many hands to get this far, a very long road to walk remains ahead. Now, as the doors to La Esquinita prepare to open, a new stage of work is just about to begin.

This article was written by Eric Griego, BCC Board Member, with valuable input from Julianna Silva, Cristina Rogers, and Alaska Piper.

Eric Griego is a PhD candidate and instructor in American Politics and Public Policy at the University of New Mexico. Griego is presently state director of the Working Families Party. Griego served as a state senator from 2009 to 2013. He has since worked as a researcher, analyst, and policy maker on many public policy issues, which have ranged from economic development to early childhood education.