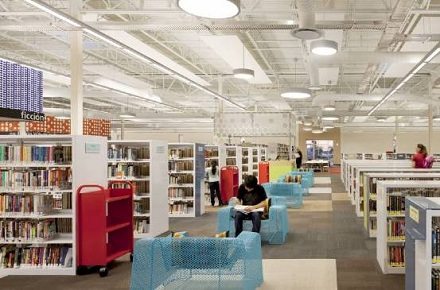 At a time when many communities are struggling to keep libraries open, this story warms our hearts and should delight the Carnegie Corporation. The International Interior Design Association has honored the McAllen, Texas Public Library as the recipient of its 2012 Library Interior Design Competition. The gigantic (124,500 square feet, to be precise) McAllen library was built on the site of a Walmart after the box store giant closed up shop and left the space vacant. The result is the biggest single-story public library in the U.S., and the discussion of how the designers took this massive unlibrary-like space and transformed it through the use of colors, lighting, and special furniture is impressive. The designers were anything but boring thinkers. According to The Daily Mail, “The children’s area was inspired by the Fibonacci Series, a spiral that the designers say mimics the growth pattern in children. There is also a ‘spy cave,’ known as area 3918, which is an acoustically separated area that serves as a popular teen hangout.”

McAllen Public Library’s new user registration reportedly shot up by 23 percent in the month following its opening. We imagine that everything about this story would have brought a smile to the face of the late Molly Ivins. –Ruth McCambridge and Mike Keefe-Feldman