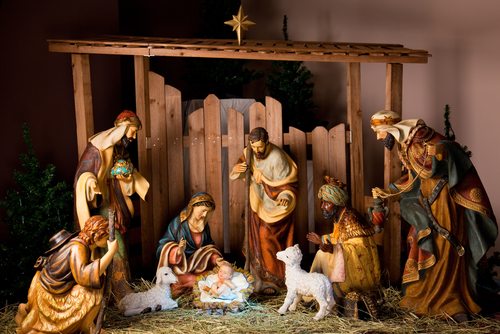 With Christmas a little more than a week away, a small town in Indiana is fighting to display their baby Jesus in a manger, Mary and Joseph (don’t forget the Magi) in the town’s now much disputed nativity scene on public property.

Residents in Brookville, Indiana have been assembling a nativity scene outside the county courthouse for almost 50 years. As per tradition, the volunteers collect donations to repaint the figurines and then display the statues each year just after Thanksgiving.

However, for the past four years, Freedom From Religion Foundation (FFRF), a nonprofit based in Wisconsin, has been challenging the town’s right to display the nativity scene on public property as a violation of the First Amendment and finally launched a lawsuit through the American Civil Liberties Union of Indiana. The argument being that the placement of the nativity scene on government property acts like an implicit endorsement of religion, as a violation of the “separation between church and state.”

“Any reasonable person viewing this display would conclude that its principal effect is to advance religion,” said Gavin Rose, staff attorney at the ACLU of Indiana in a news release. “The First Amendment protects these kinds of displays by individuals and groups on private property but also makes clear that displays on public property, which is maintained by taxpayers, cannot demonstrate a preference for religion.”

In response, the residents started a Change.org petition to keep the nativity scene in place as well as an online campaign that has gained more than 10,000 members.

The County Commissioner Tom Wilson does not believe any violation has occured. Wilson, who has ignored FFRF’s letters, says the display is the residents’ expression of speech and covered under their constitutional right to freedom of religion.

“It’s [the residents’] property. They’re taxpayers and they pay for it,” he said. “We’re not trying to push our religion on anyone here in Franklin County. We’re open to all forms.”

But Wilson’s wrong. It’s the government’s property, not the residents’. And the issue isn’t which religion is being showcased in the scene, but that any religion is displayed at all. However, is he also wrong that the display is covered under the residents’ constitutional right to freedom of religion, despite its placement?

Well, the Supreme Court has been fairly vocal about keeping religion in its place, which is far and away from governmental institutions. Of course, this would exclude the various mentions of a monotheistic God on both our currency and in the Pledge of Allegiance.

While there is no quote-for-quote phrase in the constitution that requires “separation between church and state,” the First Amendment does say, “Congress shall make no law respecting an establishment of religion, or prohibiting the free exercise thereof…” Meaning, the government will neither prevent the expression of religious beliefs nor will it in any way endorse a religion. The Supreme Court has also championed the “separation” in a number of cases over the last several decades.

Long after the famous Scopes “Monkey” Trial (1925) in which a public school teacher was prosecuted for teaching evolution, in McCollum v. Board of Education (1948), the Court decided religious instruction in a public school violated the Establishment Clause quoted above, where a state and government-funded organization would have a position on religion. A similar ruling in Murray v. Curlett (1963) found schools could not read the Bible over the intercom in what were essentially religious ceremonies, and force students to participate in the reading. A decade later in Lemon v. Kurtzman (1971), the Justices established a three-prong test to determine whether a religious action violates the First Amendment, one of which prohibits “excessive entanglement” between government and religion.

Perhaps most pertinent to the Brookville case, the Court decided in Allegheny County v. ACLU (1989) that a nativity scene placed inside a government building and the menorah outside the building was a violation of the Establishment Clause.

Given the precedent, it would appear FFRF does have grounds to be asking Brookville to remove the nativity scene.

But, the courts’ opinions in these cases seem to differ from the public. A study released just a few days ago by the Pew Research Center’s Religion and Public Life Project addresses the very question of religious symbolism on public property, much like the dispute in Brookville. The study found 44 percent of Americans think Christian symbols like the nativity scene should be allowed on governmental property. Another 28 percent believe such imagery should only be allowed if it is accompanied by symbols from other religions, like a menorah of Hanukah. Only 20 percent believe there should be no religious displays on government property.

Many would likely argue what would be the harm in letting this small, suburban town tucked away between the Great Lakes display their nativity scene. Unfortunately, the law doesn’t make any such arbitrary allowances, and nor should it.

Despite the Pew Research Center’s study’s results, the FFRF receives about 2,000 complaints nationwide about cases just like Brookville, where it does appear there could be a mingling, even if unintended, of religion and the government.  –Shafaq Hasan