An Unusual Employee Onboarding Requirement—Or Is It? 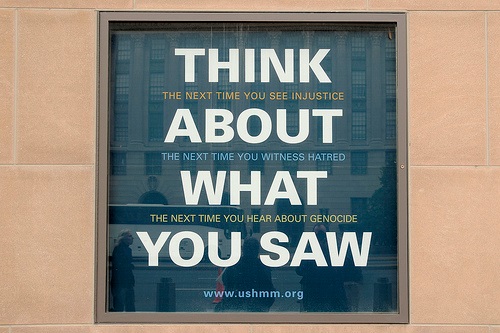 At most organizations, after all the interviews are over, the job offer is presented, and a job applicant becomes a new employee, a comprehensive onboarding process begins. This process often includes meeting leaders from a variety of departments, receiving instructions on all technical equipment, and visiting multiple sites if an organization has more than one location. For new special agents and intelligence analysts of the Federal Bureau of Investigation (FBI), part of their onboarding process includes a visit to the United States Holocaust Memorial Museum (USHMM), adjacent to the National Mall in Washington, D.C.

FBI Director James B. Comey was nominated by President Barack Obama in June 2013, confirmed by the U.S. Senate in July 2013 for a 10-year term, and sworn into office on September 3rd, 2013. It is at his instruction that new special agents and intelligence analysts visit the Holocaust Museum.

Comey explained this requirement during a recent speech at the US Holocaust Memorial Museum:

“Naturally I want (new employees) to learn about abuse of authority on a breathtaking scale. But I want them to confront something more painful and more dangerous: I want them to see humanity and what we are capable of.”

With all the difficult challenges that the FBI and its agents encounter, Comey wants his team to understand the past, the evil that exists, the capability of good people to follow those who are bad:

“There are so many ways to fight evil to ensure it doesn’t hold the field. Some do this through public service that can involve actual physical battles against evil; others by different kinds of service, including the service of teaching a world what happened.”

(Editor’s Note: In subsequent days, Comey’s speech has drawn rebukes from representatives of the governments of Hungary and Poland, which Comey, intentionally or not, lumped together with Germany among those who unknowingly committed evils in World War II. NPQ will keep an eye on this story as it develops.)

There are simply too many examples of good people who follow bad people. With the 20th anniversary of the Oklahoma City bombing, we wonder what would have happened had Terry Nichols alerted the authorities before the bombing took place. As we watched this year’s Boston Marathon, we wondered what would have happened if the brother who survived had turned his brother in to the authorities rather than conspiring with him.

“That is why I send our agents and our analysts to the Holocaust Museum. I want them to stare at us and realize our capacity for rationalization and moral surrender. I want them to walk out of that great museum treasuring the constraint and oversight of divided government, the restriction of the rule of law, the binding of a free and vibrant press. I want them to understand that all of this is necessary as a check on us because of the way we are. We must build it, we must know it and we must nurture it now, so that it can save us later. That is the only path to the responsible exercise of power.”

Onboarding shouldn’t be boring. In fact, leaders in your organization should spend the time to create unusual onboarding exercises. You will reap the benefits with more engaged employees.—Debbie Laskey

Philanthropy Reflects Its Era: From Industrial, to What?

Art Can Inspire when Viewed in the Most Unlikely of Places

The Intersection of Branding, 9/11, the World Trade Centers...