An Update on Student Loans for Nonprofit Workers 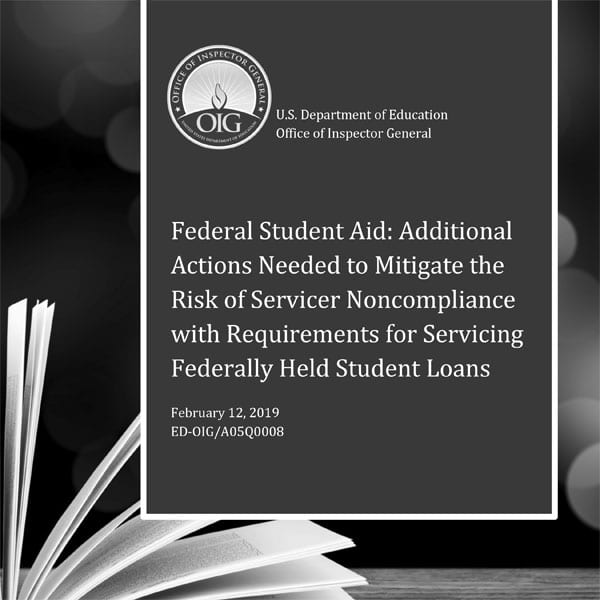 Last year, an audit revealed that those participating in the student loan forgiveness program for those employed by nonprofits, among other specified jobs, were not being rewarded with the promised debt cancellation after ten years. Now, the latest audit from the Office of the Inspector General (OIG) of the US Department of Education has exposed failures to follow federal rules by the loan servicers who manage the student loans and collect the payments.

This latest audit studied records from 2015 through 2017. It showed that Federal Student Aid (FSA), which is the office of the US Department of Education that oversees the student loans, have rarely penalized loan servicers when errors by those companies have been discovered. This may have compromised the rights of the student loan borrowers.

Significant findings of the audit include:

The executive director of the Student Loan Borrower Protection Center, Seth Frotman, stated, “This damning new audit is just the latest in a series of lawsuits and reports by law enforcement officials and government watchdogs showing the Department of Education is asleep at the switch while borrowers get hurt.” Frotman was the former student loan ombudsman at the Consumer Financial Protection Bureau.

Students can educate themselves about loan payment options. There’s the aforementioned loan forgiveness program for nonprofit employees, at least for the time being. There’s also a new super-specific loan forgiveness arrangement for professionals working in opioid addiction programs, created by the National Health Service Corps (NHSC), a division of the US Department of Health and Human Services. For three years of full-time work at an approved substance site, there is $75,000 for loan repayment. (There’s also a smaller award for part-time professionals.) Be aware of all the payment options available, from income-driven repayment plans to forbearances if suddenly unemployed. Compare loan servicers, check the loan payments with calculators, and get a second opinion on the information from those servicers. And, always follow up; complain as soon as a mistake is discovered.

US Senator Lamar Alexander (R-TN), the chairman of the Senate Health, Education, Labor and Pensions Committee, has recently proposed a bill that would automatically deduct federal student loan payments from paychecks, similar to Social Security. This is only a proposal at this moment in time, but considering the errors and continuing complaints regarding the federal loan servicers, there is hardly any confidence that this would be without more mistakes, errors, and disregard for the rights of the student loan borrowers.—Marian Conway