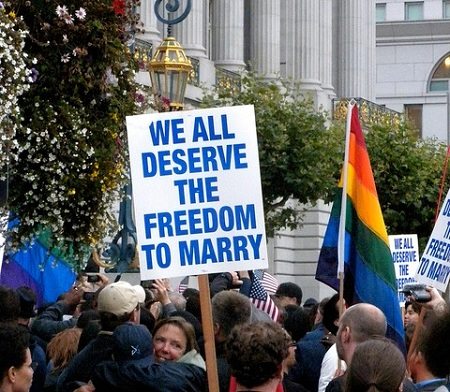 The Supreme Court announced Friday that it will review two cases involving discrimination against same-gender couples. As early as March, the court will hear arguments for and against the Defense of Marriage Act (DOMA), which only recognizes heterosexual couples, thereby denying federal benefits to legally married lesbian and gay couples. The justices will also weigh in on California’s Proposition 8, which narrowly passed by ballot initiative in 2008 and denies gay and lesbian Californians the same right to marriage that opposite-gender couples enjoy.

It didn’t take long for advocacy groups to send out appeals and calls for action through e-mail blasts and websites. The Human Rights Campaign, the nation’s largest lesbian, gay, bisexual, and transgender (LGBT) membership organization, immediately sent an e-mail on behalf of its president, Chad Griffin. Griffin hails the Supreme Court’s decision to take up DOMA and Proposition 8 and stresses that “a win in either of these cases would mark an incredible, decisive point in this movement’s history.” He warns, however, that “extreme right-wing leaders are going to immediately rally their base” and claim that “the Court can’t outpace public opinion.” He thus asks people to sign a petition reminding opponents that a majority of Americans now support marriage equality.

Rea Carey, executive director of the National Gay and Lesbian Task Force, a LGBT civil rights group, also cautions supporters that “opponents are still as determined to keep us down” and “will continue to fight against our freedom to marry in the courts, oppose efforts in the legislative branch to repeal the so-called ‘Defense of Marriage Act’” in order “to reverse many of the gains we have worked so hard to achieve over the past few years.” She promises that her organization is “as determined as ever to fight for LGBT equality” and requests donations. Kevin Cathcart, executive of Lambda Legal, the oldest legal LGBT organization, in turn reminds e-mail recipients that this latest development “doesn’t just happen” and that it is “the result of years of strategic, impact litigation.” He asks for support to help “continue the fight.”

The American Foundation for Equal Rights (AFER), the sole sponsor of the challenge to Proposition 8, blogged their appeal. The nonprofit had brought together Theodore Olson and David Boies, adversaries in the historic Bush v. Gore case that decided the 2000 presidential election, to convince the Supreme Court justices of the unconstitutionality of the ballot proposition. Arguing that their legal team has “successfully argued our case in Federal District Court and the Ninth Circuit Court of Appeals, showing that Prop. 8 violates basic constitutional principles,” they “will defend those victories before the highest court in the nation” and also request support in reaching their fundraising goal.

This movement is now expert at keeping its troops rallied and its ability to mobilize quickly is impressive.

Meanwhile, the nonprofit advocacy group leading the opposition to marriage equality, the National Organization for Marriage (NOM), also responded swiftly to the news. The group issued a press release on Friday in which it applauded the Supreme Court for taking up the Proposition 8 question and predicted that the high court will uphold the California law. It also notes that NOM “was the largest contributor to qualifying Proposition 8 to the ballot and has been a major supporter of legal efforts to uphold it.” –Erwin de Leon