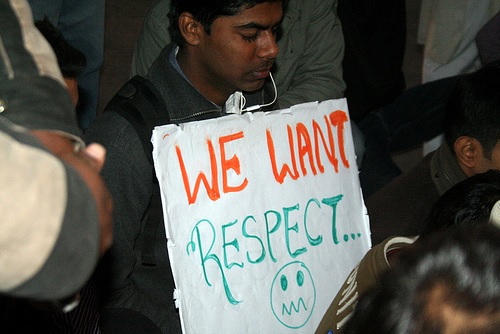 A little more than two years after the brutal, fatal gang rape of 23-year-old medical student Jyoti Singh in Delhi that ignited global outrage, the BBC is airing a documentary about the rape and its aftermath, ignoring protests from the Indian government, who believe some parts of the documentary are “creating an atmosphere of fear and tension.” The Home Affairs Ministry of India has already ordered YouTube to take down a link to the documentary after people had viewed it online.

India’s Daughter was due to air in the UK, Canada, Switzerland, Denmark, Sweden, and India this Sunday, March 8th, International Women’s Day. However, after the Indian government passed an injunction against showing the documentary in India, BBC moved up the airing to Wednesday for UK audiences.

Much of the resistance and controversy surrounding the documentary comes from an interview with one of the four convicted rapists sentenced to death, Mukesh Singh, who makes inflammatory statements blaming the victim for her own rape and death.

“A decent girl won’t roam around at nine o’clock at night. A girl is far more responsible for rape than a boy,” Singh said in an interview with India’s Daughter director Leslee Udwin, a British actress and producer. “Housework and housekeeping is for girls, not roaming in discos and bars at night doing wrong things, wearing wrong clothes.”

According to Singh, who drove the bus in which the assault took place, the victim would have survived had she not fought back and were she not out at night with a man to whom she was not married.

Rajnath Singh, India’s home minister, has condemned the statements as “highly derogatory and…an affront to the dignity of women.” He told India’s upper house of Parliament:

“The respect and dignity of women constitute a core value of our culture and traditions…[we] will not allow any attempts by any individual, group or organization to leverage such unfortunate incidents for commercial benefit.”

The minister also questions the circumstances under which Udwin was able to obtain an interview with the prisoner. Udwin has responded that she received all the required permissions prior to her interview with Mukesh Singh.

Jyoti Singh’s parents, along with other activists and politicians, are rallying behind the movie. Her father, Badri, says the movie will reveal the “bitter truth” about his daughter’s death. “Everyone should watch the film,” he told the news channel NDTV. “If a man can speak like that in jail, imagine what he would say if he was walking free,” he said. Jyoti’s mother Asha echoed his sentiments: “I don’t care what the government does—bans the film, doesn’t ban the film—the only thing I know is that nobody is afraid. It is not only Mukesh who thinks like this.”

One must wonder if the motive behind the banning of the film is to contain the truth about the harassment Indian women receive from some younger men, a reality that was exposed as this brutal rape, and more widespread reports of other rapes that followed, made international news. According to parliamentary affairs minister M. Venkaiah Naidu, “We can ban the film in India. But this is an international conspiracy to defame India. We will see how the film can be stopped abroad, too.”

From Udwin’s perspective, showing the documentary would have been an opportunity for the nation of India to show the world how it has changed after the rape. Instead, “the banning of the film will see India isolated in the eyes of the world. It’s a counterproductive move.”

Some locals have described issues with having an outsider like Udwin critique their society. Reviews have described the work as “disturbing” yet “disappointing.” Others have said it’s “compulsory watching” yet while verging on being nearly impossible to watch due to the impact of its content.—Shafaq Hasan