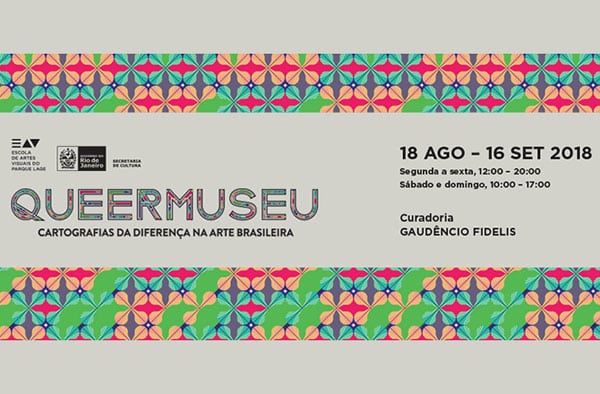 Queermuseu has had a queer year indeed. In a turbulent saga involving a large Spanish bank, an art museum, a mayor who’s also a preacher, a federal judge, and an art school, it is finally up and running in the Parque Lage, a public park in Rio de Janeiro that is also home to the famous Escola de Artes Visuais (EAV).

Santander closed the exhibition almost immediately. They then released a statement that is as confusing as it is conciliatory. They wrote,

The aim of Santander Cultural is to encourage the arts and promote debate around the big questions of the contemporary world, and not generate any type of disrespect or discord.

We heard the complaints and understand that some of the works in the exhibition Queermuseu disrespected symbols, beliefs, and people, which is not in line with our view of the world. When art is not capable of being inclusive and generating positive reflection, it loses its greatest purpose, which is to elevate the human condition.

We’ve decided to close the exhibition this Sunday, 09/10. However, we guarantee to continue to be committed to the promotion of the debate around diversity and other big contemporary themes.

Whatever they might mean by art that prompts debate but not discord, Santander broke no rules. As NPQ has pointed out before, private companies are free to choose which organizations they will sponsor and which they will not; to force them to do otherwise is to restrict free speech. Santander calculated its risks, just as Nike did last week, and simply came to a different conclusion.

Fidélis (true to his name) continued to look for a place to stage his exhibition despite the threats. He tried the Rio Art Museum, but the mayor of Rio de Janeiro is an evangelical preacher, and he said the museum (which receives public funding) would not host it.

Fabrice Houdart, a human rights officer at the United Nations who focuses on sexual orientation and gender identity issues like intersexuality, said, “In several places in Latin America, legal rights have changed much more quickly than attitudes.” Brazil hosts the world’s largest gay pride parade and legalized gay marriage in 2013 (two years before the US), but 199 of its 513 lawmakers belong to the Evangelical caucus, according to the New York Times’ Ernesto Londoño, and the recent overthrow of Dilma Youssef has made some citizens nervous about their rights. The current president, Michel Temer, “abolished the Ministry of Culture, until protests by artists, musicians and others…forced him to rescind the order,” according to Frieze.

Citizens came to the defense of Queermuseu, as they did for their ministry. A crowdfunding campaign to revive the exhibit broke national fundraising records when it brought in about half a million dollars. Fidelis said, “There is a general understanding in Brazilian society—whether they agree with these exhibitions or not—that these are grave acts of censorship.”

The exhibition reopened in Parque Lage to long lines of visitors and enthusiasm from young citizens. “Coming here is a way of supporting the fact that people should have the right to choose if they want to go to an exhibit or not,” said 27-year-old librarian Priscilla Feliciano.

In a last attempt to restrict the exhibition, a federal judge ruled that no one under age 14 could see the exhibit, but the ruling was overturned. Fidélis watched with satisfaction as the poster announcing it was torn down.

Perhaps it’s better the show wound up at a park. As Fidélis said, “People go to see the exhibit because they want to reclaim a right to something that has been stolen from them: the ability to have access to art. I spoke to many people at the opening and they said that what really compels them to see the exhibit is that they feel a part of it now. The exhibit now belongs to society, it belongs to everyone.”

Bianca Kalutor, a transgender woman, said, “There are all these spaces in which queer people are questioned. Being trans, you develop an ability to enter and leave spaces without being noticed.” She said Queermuseu finally made her feel safe and familiar.

Well, the exhibition, its story, and its message are certainly being noticed now.—Erin Rubin