Can We Imagine a Green New Deal Truly Realized? 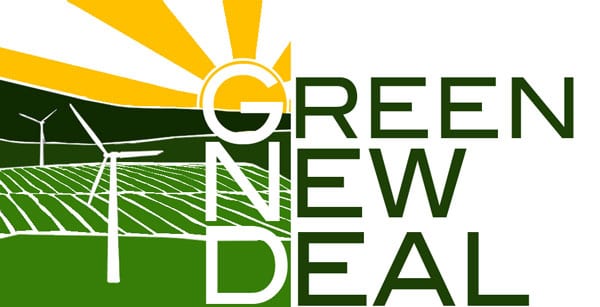 December 5, 2018; Intercept and The Atlantic

Since the midterm elections, calls for a “Green New Deal” have been mounting. As Robinson Meyer reports in the Atlantic, at a Town Hall forum organized by Senator Bernie Sanders, Alexandria Ocasio-Cortez said that the Green New Deal “is going to be the New Deal, the Great Society, the moon shot, the civil-rights movement of our generation.”

Of course, the idea of a green New Deal is not new. Back in December 2008, Peter Baker and John Broder reported in the New York Times that [then President-Elect] Barack Obama “said he would invest record amounts of money in the vast infrastructure program, which also includes work on schools, sewer systems, mass transit, electrical grids, dams and other public utilities. The green jobs would include various categories, including jobs dedicated to creating alternative fuels, windmills and solar panels; building energy efficient appliances, or installing fuel-efficient heating or cooling systems.”

In fact, Obama promised that there would be five million green jobs. Time Magazine wrote about a Green New Deal, as did the Economist (even if the latter wrote against it). Van Jones, who had authored a book called the Green Collar Economy, was named by Obama as Special Advisor for Green Jobs. But, while significant investments in renewable energy did occur—according to one estimate, the amount spent was $120 billion—the stimulus spending only lasted for a short while. Meanwhile, Jones himself was forced out before 2009 had come to a close. By 2010, austerity had already begun to replace the largely thwarted Green New Deal.

But, as a common refrain has it, American is (or at least can be) a land of second chances. Could the promised Green New Deal of a decade ago finally arrive? Writing in the Intercept, author-activist Naomi Klein makes the case. The idea, she says, is “for the Democratic Party to use its majority in the House to create the Select Committee for a Green New Deal.” To date, 17 representatives have endorsed the measure.

The draft text calls for the committee…to map out a “detailed national, industrial, economic mobilization plan” capable of making the US economy “carbon neutral” while promoting “economic and environmental justice and equality.” By January 2020, the plan would be released, and two months later would come draft legislation designed to turn it into a reality.

That early 2020 deadline is important—it means that the contours of the Green New Deal would be complete by the next US election cycle, and any politician wanting to be taken seriously as a progressive champion would need to adopt it as the centerpiece of their platform. If that happened, and the party running on a sweeping Green New Deal retook the White House and the Senate in November 2020, then there would actually be time left on the climate clock…

As Meyer notes, “the single most crucial aspect of the Green New Deal is its proposed job guarantee, a controversial policy that says that every American can have a job with the government if they want one.” This is critical, Meyer notes, because employment security would be a clear benefit that people would jealously defend—much as they did defend the right to health insurance for those with pre-existing conditions, protecting Obamacare against repeal.

But one element perhaps even more important than policy is a vision of what a post-Green New Deal world might look like. Writing in the Intercept, Kate Arnoff gives this her best shot:

It’s the spring of 2043, and Gina is graduating college with the rest of her class.… Her parents availed themselves of some of the year of paid family leave they were entitled to, and after that she was dropped off at a free child care program.

Pre-K and K-12 were also free, of course, but so was her time at college, which she began after a year of public service, during which she spent six months restoring wetlands and another six volunteering at a day care much like the one she had gone to.

Now that she’s graduated, it’s time to think about what to do with her life. Without student debt, the options are broad. She also won’t have to worry about health insurance costs, since everyone is now eligible for Medicare. Like most people, she isn’t extraordinarily wealthy, so she can live in public, rent-controlled housing…. Utilities won’t be an issue, either. Broadband and clean water are both free and publicly provisioned, and the solar array that is spread atop the roofs of her housing complex generates all the power it needs and more.

“That’s the world a ‘Green New Deal’ could build,” Arnoff concludes, after detailing other features such as a net-zero-emission, high-speed train system and a network of job centers to ensure all find gainful employment. Arnoff concedes that the political hurdles to overcome in making this vision a reality would be enormous. Then again, so are the costs of continued climate inaction.—Steve Dubb