Chen Guangchen Makes it to U.S. and Continues to Inspire Activists in China 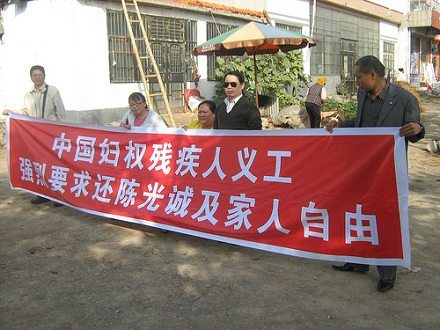 On Saturday night, Chen Guangchen arrived in the U.S. The blind activist, whose detention by authorities in China recently became a subject of tension in U.S.-China diplomatic talks, has championed causes for China’s farmers and disabled and has called attention to the Communist government’s forced abortions and sterilizations policy, with the latter culminating in a protest that landed the legal activist in prison from 2006 to 2010. Upon his release from prison, Chen spent more than a year under house arrest until he managed to escape to the U.S. embassy. China agreed to let Chen fly to the U.S. in what the New York Times labeled a “face-saving compromise,” attributing Chen’s trip not to political asylum but to his desire to study law with a fellowship at New York University.

Reuters reports that Chen’s actions have “encouraged Chinese lawyers and advocates to challenge what they see as the ruling Communist Party’s stifling of lawful dissent” and “lawyers from around the country have already come forward to provide his extended family with the kind of advocacy Chen, a self-taught legal activist, became famous for—taking on politically sensitive cases against all odds.”

Specifically, Reuters notes that “more than a dozen” lawyers have stated their willingness to represent Chen’s nephew, who was detained soon after Chen’s recent escape. At least one of the lawyers, Liu Weiguo, appears to be willing to pay a high toll for such an offer, saying, “Sooner or later, if you don’t want to be a slave here [to authorities], you’d have to make some plans for jail…I’m not willing to go to jail but I’m even more reluctant to be their slave.”  –Mike Keefe-Feldman