Chicago Public Schools to Be Faced with New, Late Round of Budget Cuts 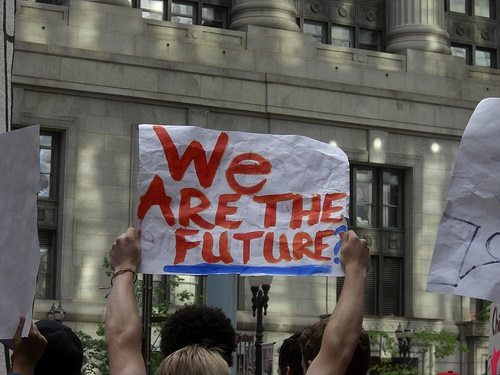 Late last week, the Chicago Board of Education announced a new round of budget cuts at the individual school level. According to the district’s press release, issued on September 25th:

The Chicago Public Schools…took the next step in its school budgeting process, providing principals with adjusted school budgets to reflect their actual enrollment, resulting in increased funding for schools that had more students than projected and decreased funding for schools with fewer students than projected. In the past two years, CPS has not reduced schools’ funding when their enrollment fell short of projections, but this year budgetary constraints mean that the district can no longer afford to hold those schools harmless.

These new reductions came after the school board had spent the summer wrestling with how to balance their budget. In order to open school this September, the board had been forced to borrow more than $1 billion, lay off more than 1,000 employees, and make major reductions in individual school budgets. As difficult as these actions were, schools opened based on staffing plans supported by that budget.

According to CPS watchdog Catalyst Chicago, the district’s latest action was driven by enrollment data (which can be downloaded here) showing district-run schools were losing an even greater number of students than was predicted earlier in the year while charter and contract schools were educating slightly more CPS students:

“The lower enrollment means district-run schools will receive about $15.9 million less than was projected in July. (Unlike in previous years, CPS officials are not holding schools harmless if fewer students enroll than was projected.) Those additional cuts include about $13.3 million in funds set aside for per-pupil disbursement, as well as 52.5 fewer special education aides and 16.5 fewer special education teachers…. District officials say about 325 educators could lose their jobs because their school didn’t meet enrollment projections.”

Schools facing budget reductions must now cope with restructuring an educational program that has been in operation for a month. For example, Kelvyn Park High was expected to lose 125 students and $1.7 million. The school administration cut 19 staff members, including nine teachers, a career coach, a school counselor, and the school’s only full-time social worker. But since 77 fewer students showed up than projected, they’ll have to cut another $496,000.

Mid-year reductions to special education funding brought a particularly strong response, with parents warning the district that they were willing to go to the courts to make sure federal requirements continued to be met. Rod Estvan of the advocacy group Access Living told the school board, “Cuts to special education after the school year begins are unprecedented. […] The need for special education teachers grows throughout the year as students are properly identified.”

The timing of this new round of budget cuts reflects more than the lack of ample and stable funding for Chicago’s 400,000 students. That was the problem being addressed as the district’s budget was finalized over the summer. This new round of cuts is an indicator of one of the unique challenges of an educational reform strategy that emphasizes school choice. Because every student is able to consider attending one of the more than 400 schools directly operated by CPS and the over 100 independently operated charter schools that serve the City of Chicago, projecting enrollment and allocating the district’s resources becomes much more difficult. With attendance based not just on community demographics but also on the success of a school’s recruitment efforts, it is difficult to accurately project who the “winners” and the “losers” will be. And the real losers become the students in schools who are forced to make cuts and adjust educational plans that are already underway.

And as painful as this round is, the district’s balanced budget counted on almost half a billion dollars in new state educational funding. With the state’s budget still in limbo as political leaders continue to skirmish, these new funds are anything but certain. If they are not realized, how CPS can adjust and still keep teaching its students is unclear.—Martin Levine