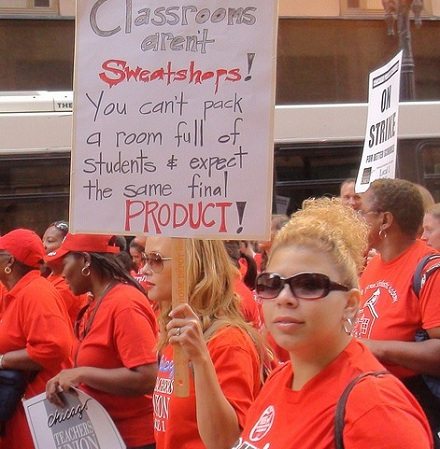 26,000 Chicago public school teachers have been on strike since Monday afternoon and now talks are reportedly progressing in a positive direction, with a potential resolution to come by Monday. The union’s main requests are:

The New York Times reports that, in a negotiation Wednesday, both union and public officials left feeling positive that an agreement would be reached soon. Chicago Teachers’ Union President Karen Lewis said they “shared a lot of back-and-forth and what really needs to get done to solve those most difficult issues.”

Critics, like the New York Times’ Nicholas Kristof, have argued that the Chicago teachers are placing their own concerns, such as seeking to “protect weak perform[ing]” teachers, over the well being of the school district’s children, 87 percent of whom, Kristof writes, come from low income families. Other sources, like the Progressive’s Matthew Rothschild, counter that the Chicago teachers are rightfully standing up for students with demands such as smaller classes and better classrooms and “by opposing rote teaching to the test.”

No matter what side you come down on, the strike has certainly brought to head nationwide debate on many education topics including new teacher evaluation systems, what quality schools look like, and how much one can trace student success to his or her teacher. The strike is widely seen as perhaps setting an important precedent for teachers’ unions across the country. –Kristin Barrali