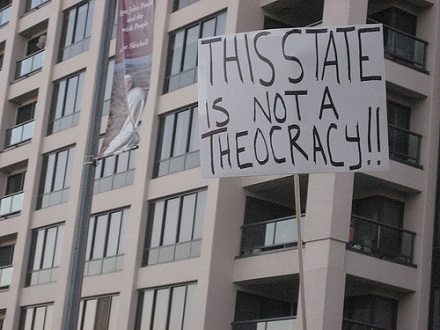 Nearly 1,500 churches participated in “Pulpit Freedom Sunday” this past weekend, an event organized by the conservative Christian Group Alliance Defending Freedom (ADF) in which pastors were encouraged to discuss politics from the pulpit, and even to back a particular candidate. The event has grown steadily over the years, with just 33 pastors taking part in 2008 but more than 1,000 reportedly taking part this year. This annual effort is intended to challenge the IRS regulations that restrict religious leaders from endorsing candidates to their congregations. Participating pastors were encouraged to “preach a biblically based sermon regarding candidates and the election” and to videotape those sermons and send them to the IRS. Under the U.S. tax code, nonprofit organizations such as churches may express views on any issue, but they jeopardize their tax-exempt status if they speak for or against any political candidate.

The ADF plans to “actively represent any church or pastor who has been threatened or punished for actively speaking from the pulpit.” This event is intended to provoke the IRS into taking action so that the ADF can challenge and try to overturn the Johnson Amendment (the 1954 change in the U.S. tax code which prohibited tax-exempt organizations from endorsing or opposing political candidates). Erik Stanley, senior legal counsel for ADF, told Fox News, “The purpose is to make sure that the pastor — and not the IRS — decides what is said from the pulpit. It is a head-on constitutional challenge. We’re hoping the IRS will respond by doing what they have threatened. We have to wait for it to be applied to a particular church or pastor so that we can challenge it in court. We don’t think it’s going to take long for a judge to strike this down as unconstitutional.”

While participants maintain they are standing up for freedom of speech, critics of the movement say that it threatens the constitutional principle of separation of church and state. Americans United for Separation of Church and State (AU) has sent over 60,000 letters to clergy across the country to remind them that federal law prohibits tax-exempt entities, such as houses of worship, from endorsing candidates for public office.

A July poll from the Pew Forum on Religion & Public Life shows that a majority of Americans oppose churches endorsing political candidates. For those looking to gauge the extent to which political activity is allowed by churches and nonprofit organizations, the Pew Forum on Religion & Public Life recently released “Preaching Politics from the Pulpit: 2012 Guide to Political Activity by Religious Organizations,” which clearly shows charitable organizations how to stay within the confines of IRS law. It is not clear why the IRS has remained silent, according to this Chicago Tribune article, and the IRS reportedly did not return the Tribune’s request for comment. The article does point out that the IRS lost a key case in 2009 and has not prosecuted any infractions since. The final list of churches that participated in this year’s Pulpit Freedom Sunday action will soon be released by ADF. –Kathleen Hughes