Community College of Philadelphia to Offset Tuition for More than 400 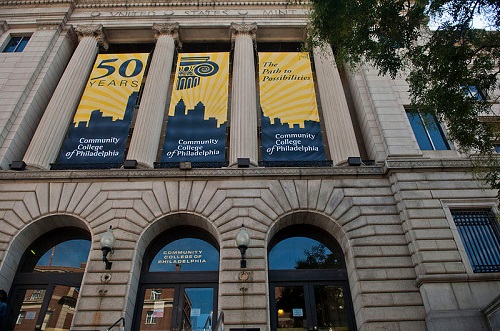 The Community College of Philadelphia, the largest public higher education institution in Philadelphia, is celebrating its 50th anniversary with a new program that will offset tuition for an estimated 440 students who are eligible for Pell Grants, beginning in the next academic year. The program is notable both for its alignment with President Obama’s national call to make community colleges more accessible and for its demonstration of how a city can make post-secondary education an attainable goal for low-income students through state and local partnerships.

As background on how the program came to be, Donald Guy Generals, president of the Community College of Philadelphia, explained in a recent op-ed that it was the fortuitous result of budget increases to community colleges at both the state and the city levels. “The proposed funding will enable us to support student success and completion, and will allow us to further support existing programs while expanding others consistent with the local and regional economy,” Generals added.

Because CCP views this new program as a source of enrollment growth, it is also launching a fundraising campaign to build a $10 million endowment. CCP aims to enroll 845 students in three years and eventually cover all student textbook costs. According to the Inquirer, these additional expenses are a part of the institution’s long-range fundraising goal of $40 million.

In a national study from 2012–2013, the Community College Research Center at Columbia University found that average tuition and fee charges for a full-time student at a two-year institution were $3,130, as compared to $8,660 at a public four-year institution, but notes that with grants and tax credits the average net price at community colleges was actually negative $1,220, meaning that students on average actually get money back for attending. (At the Community College of Philadelphia, annual tuition and fees are about $5,500, according to the Inquirer.) CCRC also points out that while “sticker prices” have increased at community colleges over the last decade, net prices have actually fallen as a result of increases in Pell Grants and tax credits. Thirty-seven percent of community college students carry loans, according to a 2011–2012 study, but CCRC adds that the “the rate of borrowing and the average amounts among borrowers are far lower than in other sectors.”

With this new plan, Philadelphia is headed in a bold direction that will bring more educational opportunity to students from public, private, parochial, and charter schools from that city. With some state and city budgets still limited, it will be interesting to follow how other regions implement this model. Writing recently in the Washington Post and citing a recent study by Nexus, Jeff Selingo posits that an excise tax on endowments over $500 million at private higher education institutions could generate $6 billion for just this purpose.—Anne Eigeman