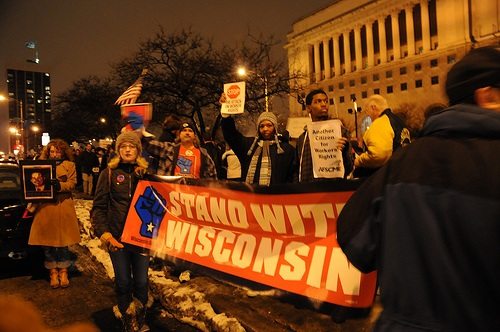 In a ruling yesterday that will give a warm fuzzy feeling to Gov. Scott Walker of Wisconsin and his followers, a judge threw out a lawsuit against legislation that, among other things, bars most public sector unions from most collective bargaining rights. The Wisconsin Budget Repair Bill—or, as it is called, Act 10—targets public sector unions. When it was passed by the legislature, it was billed as a tool to help school districts and municipalities weather the coming cuts in state aid. A very controversial piece of legislation, Act 10 sparked a round of massive demonstrations at the state capitol and has been challenged legally on several counts.

Although this decision may be appealed, Judge William Conley effectively upheld Act 10’s stipulation that government unions cannot bargain about anything other than salaries (and salaries can only be raised as much as the annual rate of inflation) and they cannot be recognized by the state unless 51 percent of all potential members support the union in annual elections. Parts of the legislation are still blocked due to an appeal of an earlier decision.

The unions, of course, decry this decision, saying that Act 10 has encroached on their rights to associate and equal protection under the law. It is a First Amendment issue, they claim, because it does not allow them the right to speak freely about their demands.

The judge stated that the First Amendment does indeed protect the right to speak, and unions still have the right to speak under Act 10. However, the First Amendment does not require anyone to listen, he argues, and Act 10 specifically does not allow state workers to listen to what the unions are saying. To overturn it, Act 10 would have required a negative restriction on the freedom of speech, which it does not, according to his interpretation.

The one union representative quoted says that this is inconsistent, and requiring state workers to not listen to what the unions are saying is, in fact, a negative restriction. Kind of like the tree falling in the woods; if no one is listening, are you speaking? Does the right to speech involve needing someone to listen?—Rob Meiksins