Dark Matter: What Some U.S. Science Museums Aren’t Showing You 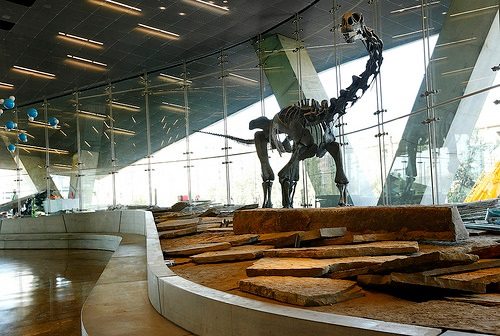 Staff science writer for the Dallas Morning News Anna Kuchment noticed something off about an exhibit at the Perot Museum of Nature and Science concerning global warming and climate change. Upon investigation, it turns out that one of the panels, which discussed the causes of climate change, including manmade influences like carbon emissions, had been omitted—lost in the shuffle—since the exhibit’s installation in December of 2012.

This caused Kuchment to become suspicious, given some deep connections between the museum and the Texas oil industry, which has some investment in downplaying the connection between the use of fossil fuels and the rise in global temperatures. ExxonMobil has given more than a million dollars, and the earth sciences hall where the panel was slated to hang was named for the Rees-Jones Foundation, started by Chief Oil & Gas founder, president, and CEO Trevor Rees-Jones and his wife, Jan, which has donated more than $25 million.

Steve Hinkley, vice president of programs at the Perot Museum, says he did not learn of the panel’s omission until a reporter began inquiring about it earlier this month, and has had a temporary panel installed. (The temporary panel is apparently also problematic; some scientists who’ve seen it say that it equates the influence of human activity on climate change with that of volcanic emissions, when the latest studies show that our carbon dioxide emissions are close to a hundred times greater.)

According to Hinkley, “neither the museum’s donors nor its board of directors has any say in museum content. He added that none has ever expressed opposition to the display of information about climate change.” But just because donors and the board don’t act directly doesn’t mean that the desire not to court controversy hasn’t had an effect on what exhibits say and don’t. The News Chronicle article goes on to quote several different museum workers and representatives about their experiences handling what some outside the scientific community consider sensitive topics.

In the end, part of the decision to avoid these and other sensitive topics lies with trying to court a broader audience that’s more interested in flashier topics like dinosaurs and comets than in “bummer topics” like global warming. However, if the goal of science museums is to leave their attendees informed as well as entertained, then they should not shy away from giving the latest and whole truth concerning what Paul Martin, senior vice president for science learning at the Science Museum of Minnesota in St. Paul, called “about the most politically controversial topic that we can take on right now.”—Jason Schneiderman