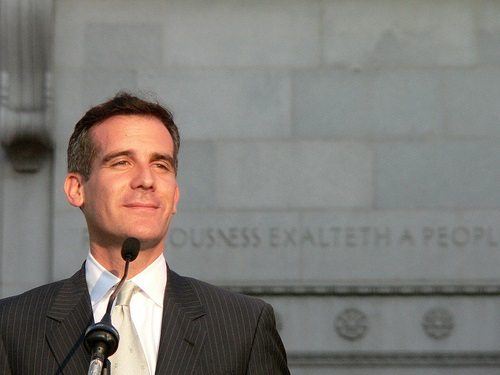 The Los Angeles Times reports that a deal between the mayor of Los Angeles and the city’s utility workers union to audit two controversial Department of Water and Power (DWP) nonprofit trusts “has ground to a halt.”

The agreement came last fall after an ongoing fight between Mayor Eric Garcetti and the DWP’s main employee union over access to the trusts’ financial records, giving city auditors “unfettered access” to them. The mayor is questioning how more than $40 million in public ratepayer money donated to the groups has been spent.

But the paper reports that in late December, City Controller Ron Galperin’s office stopped work, citing a lack of cooperation from the nonprofits for unspecified reasons, and there has been no progress since then, as confidential discussions have continued.

A spokesman for the mayor repeated his position: “These audits are important to bring transparency to these trusts and accountability for ratepayers.” But the union leader, who supported the mayor’s opponent in the 2013 election, has dragged his feet on a comprehensive review of the spending records, and did not respond to the Times.

“The lack of progress raised the possibility that last year’s deal could unravel and the long-running legal and political clash over the nonprofits could resume,” says the article.

The groups have been mired in controversy since September 2013, when the Times reported that the city-owned utility had very little information on how the trusts had been spending ratepayer money given to them annually for the past 10 years; the DWP’s general manager at the time couldn’t even recite their accomplishments, even though he served on their boards of directors.

The Joint Training Institute and the Joint Safety Institute were created to improve safety and management-labor relations at the nation’s largest municipal water and power agency, but there has never been any detailed, public accounting of their expenditures. The nonprofits are jointly controlled by DWP executives and the union, which plays an active role in their management.

Union leaders are saying that since the nonprofits aren’t government entities, they are not subject to public records laws or an audit by the city controller. Last year, they sued to block a city subpoena demanding five years of detailed financial records, but a Superior Court judge sided with the city, ruling the public has a right to know how its money is spent. The union has filed an appeal, which is pending.

When the controller refused to withhold last year’s city donation to the trusts until it agreed to open their books, “some city council members brokered a compromise that the mayor praised as a means to finally settle questions about whether ratepayer money was properly spent,” the paper says.

That deal was an agreement by the city to back off its demand “to place key Garcetti allies on the nonprofit boards” and by the union to drop labor claims against the city. In exchange, city auditors were to be given access to the non-profits’ financial records; if no improprieties were found, the annual payment would be released. That’s the deal that seems to be unraveling now.

Keeping a brave face, the Times reports that the city’s administrative officer and current DWP manager issued a joint statement saying the agreement stands, and that both sides “are committed to resuming the work of the fiscal auditors as soon as possible.”—Larry Kaplan