Dispute between AIDS Nonprofit and Government Funder Gets Personal 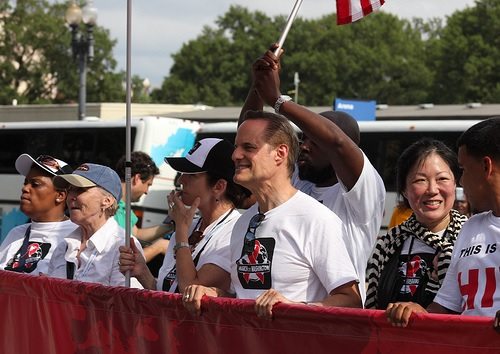 A “long-simmering animosity between two Los Angeles political figures reached new heights this week when their bad blood surfaced in a footnote attached to a federal judge’s ruling,” according to the Los Angeles Times.

The judge’s footnote referenced “vitriolic” remarks made by AIDS Healthcare Foundation (AHF) president Michael Weinstein about Los Angeles County Supervisor Zev Yaroslavsky. The two men have feuded on and off for years, even though they share the same progressive politics.

The foundation had sued the County of Los Angeles in 2012, accusing it of using audits of their contracts to retaliate for criticisms of the county and for advocating policies the county’s leadership opposed. The two entities have continuously argued over contract and billing disputes, questions about patient care at its clinics, and a successful ballot measure, bankrolled by AHF in 2012, to require condoms in adult films.

The lawsuit arose out of an audit by the county, which claimed the foundation had overcharged $1.7 million for its AIDS services by billing for costs that should have been allocated to other sources. The judge did not rule on which side was correct, only saying that the county has the right to audit its contractors.

Weinstein, defending his political tactics, told the paper that regardless of who was billed for the costs, the money was spent serving patients: “We would not have gotten to where we are today if we hadn’t fought like hell on behalf of our clients and our mission.”

A U.S. District judge ruled for the county this week. “Rather than a sincere attempt to vindicate their First Amendment rights,” the paper quotes the judge saying, “the court fears that plaintiffs instituted this action in an effort to obtain a tactical advantage in their ongoing political battles.”

To illustrate his conclusion, he included an excerpt from an email Weinstein sent to a foundation staff member shortly before the suit was filed:

The article added that Weinstein wanted AHF to call for the resignations of both Los Angeles County’s public health director and the manager of its sexually transmitted disease programs.

Sup. Yaroslavsky told the Times that the ruling was a “complete vindication” of the county’s position. “Contrary to some high-minded First Amendment motivation, he’s shown to be a thug,” Yaroslavsky said of Weinstein. “He’s used his nonprofit organization in a crass and bullying political way to get his way, which is to avoid being held accountable.”

“Anyone who attends virtually any Tuesday Board of Supervisors meeting knows who the thug is,” Weinstein said of the supervisor. He added that he would appeal the ruling and continue fighting the retaliation issue in a similar lawsuit in state court.

Weinstein is well known in civic and AIDS circles in Southern California; he is considered a dynamic and passionate advocate for his clients, and AHF is one of the largest and most effective AIDS agencies in the world (it has programs overseas, but is best known locally for its chain of successful thrift shops), with an annual budget north of $140 million. But he also has a reputation for being overly strident and abrasive.

Yaroslavsky, who is retiring this year, is a veteran local politician from Los Angeles’ affluent west side, closely aligned with retiring U.S. Congressman Henry Waxman, who has held office—starting on the city council—for nearly 40 years. He is highly respected as an expert in local government finance and popular in his district, with a reputation as a no-nonsense type.

While it’s essential for nonprofits to strenuously advocate for their causes and their clients, how aggressively that is done, and whether or not you take on powerful elected officials—let alone sue them—is a matter for debate, and should always be carefully deliberated internally before launching on a strategy.  Nonprofit Quarterly wrote last fall about a conservation nonprofit in Wisconsin that lost its state funding because it was a leading critic of the governor.

The county and foundation have a contentious yet symbiotic relationship—the classic “bad marriage.” In California, counties are primarily responsible for funding health services, but outsource many of them. The two are also fighting a suit alleging that the county improperly awarded sole source contracts to other service providers; and the foundation has already won two earlier suits over another contract.—Larry Kaplan