Dying with Dignity Canada’s Charity Status Annulled due to “Error” 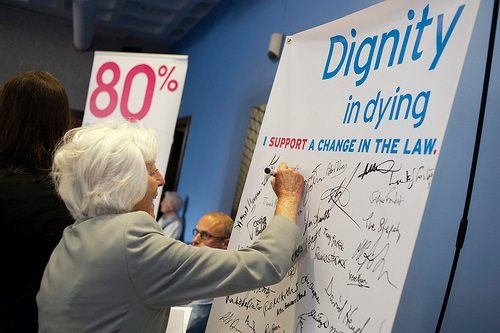 The Canada Revenue Agency sent a letter last week to Dying with Dignity Canada that removed the charitable status of the nonprofit, ruling that it had been registered as a charity “in error.”

Following an audit of the organization, officials found the charity’s activities did not fulfill the education guidelines required by the agency. “While we have determined that the organization’s services for the sick consisted mostly of charitable activities, our audit did not identify any activities advancing education in the charitable sense,” said the agency in a long letter dated Friday, January 16th.

Instead, the agency goes on to say, “It is our position the organization’s primary focus remains on advocating for alternatives to preserving human life and selectively informing the public in support of its political purpose to expand choice in dying.” In Canada, while charities may a have nonpartisan, political focus, they cannot promote or pressure an “attitude of mind” that could influence legislation, as apparently was found to be the case with Dying with Dignity.

According to the agency, the decision to annul the charity’s registration was made following an audit of the organization from January 2011 to December 2012, looking at the group’s political activity. The agency discovered that in 1982, the charity originally registered with a “political purpose—to expand choice in dying, excluding by securing the legal right to die.” As the charity has branded itself as a “health and education charity focused on promoting choice and dignity at end of life” while still lobbying for patients to have the right to die, officials believed the audit revealed an error—the charity should never have been registered in the first place. Because of this, in official terms, the status of Dying with Dignity Canada has been “annulled,” rather than “revoked.” (What this means practically is that the organization will not be required to pay tax on the assets it has accumulated.)

The Toronto-based charity, which has been advocating for assisted-suicide rights since 1982, has accepted the decision and will not fight the revocation of their status. Instead, the organization will continue to exist as a nonprofit without the status of a registered charity, though this means that donations to the group are not tax deductible.

Consequently, Dying with Dignity’s charitable status will end in 30 days. CEO Wendy Morris, however, does not seem particularly perturbed. “We won’t be opposing it,” Morris said, simply because it would be lengthy, time consuming, costly, and a distraction from our core work.” Instead, it seems this may enable the charity to more openly affiliate with politicians that support and can further the group’s mission. “We’ll be able to say, ‘here’s a candidate, come look.’”

This wouldn’t be the first time the charity has been deregistered or audited. Dying with Dignity lost their status back in February of 2010 after failing to file their tax forms. (The group registered once again in 2011.) According to Morris, the group has also been audited before, “so it’s puzzling why it’s happening now.” It seems that Dying with Dignity has been caught in the web of Canada’s conservative government, which started its special auditing of charities’ political activities back in 2012. The $8 million program first targeted environmental groups and then grew to include groups focused on human rights, poverty, and religion, among others.

While observers expect another 60 groups to be audited by 2017, there’s one group in the same boat as Dying with Dignity—Alternatives, a Montréal-based charity that helps fund health and education in the Third World. Alternatives, too, was told their charity was mistakenly registered due to an error years ago and that their status would be stripped. Currently, the charity is working with the agency to find a way to retain their status.

Death with dignity laws also gained attention in the U.S. at the end of 2014 when Brittany Maynard came forward with her story for electing physician-assisted suicide following a diagnosis for terminal brain cancer. Maynard passed away in November on the day she had elected to end her life with medication. Maynard’s family is now supporting a right-to-die bill California introduced this week.—Shafaq Hasan