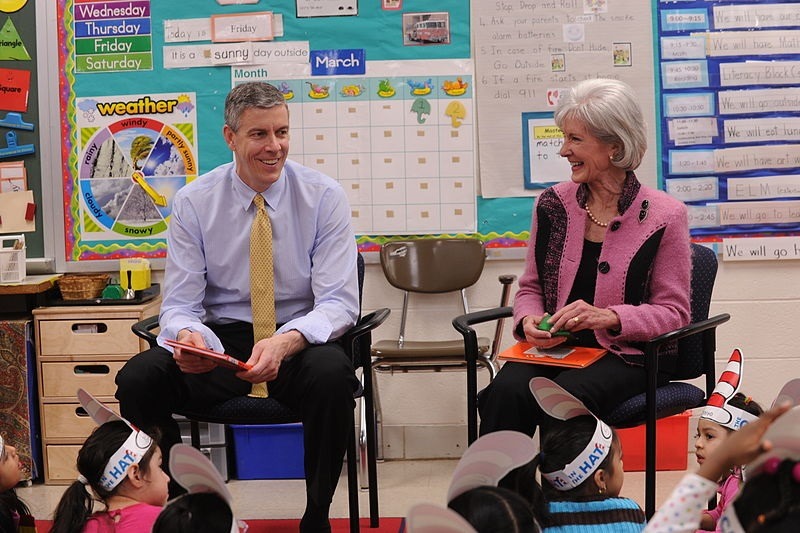 The numerous issues that have been at the center of a growing controversy about public education place the policies of President Obama in the spotlight. The debate has become integral to the U.S. Congress’s efforts to reauthorize the Elementary and Secondary Education Act (née No Child Left Behind), the vehicle through which the federal government influences the direction of public education at a state and local level.

Arne Duncan, Secretary of Education throughout the years of the Obama presidency, has led the administration’s efforts and is the champion for the themes that have become the center of debate. He has been a strong advocate for “school choice” and expanding the use of charter schools, including those operated by private for-profit organizations. He has strongly supported the adoption of the Common Core as a national set of curriculum education standards. He has worked to increase the use of standardized testing as the mechanism for assessing student performance and as a key component of school and teacher evaluation and rating. He has led the effort to reduce the power of teacher’s unions and expand the number of teachers who do not come from traditional sources (through programs like Teach for America.) And he has been aggressive in using federal funding as the lever to bring schools into alignment with the administration’s strategy.

Six years in, the backlash to these efforts has become more frequent and louder. And it threatens to severely limit the ability of the national government to have a coherent national policy to ensure all children receive an equal, high quality education.

Diane Ravitch, Research Professor of Education at New York University, sees Duncan’s years at the DoE as being much more harmful.

Lyndsey Layton, Washington Post education reporter, in a recent profile of Secretary Duncan saw the impact of his tenure as having a more global impact. She quoted Randi Weingarten, president of the American Federation of Teachers, who said, “I’ve never seen both Democrats and Republicans want to curb the authority of the federal Department of Education the way they want to now.” Jack Jennings, founder of the nonpartisan Center on Education Policy and author of a new book about education politics, told Layton that he saw little good from Duncan’s efforts. “The record will show these policies brought about minimum improvement…they also did considerable harm”

The loss of the national perspective will be a concern beyond the debate over specific strategies and tactics. It is the vantage point from which we can ensure that all children are being given an opportunity for high quality education, a concern of critical importance if we are to overcome the growing gap that are rooted in racial and socioeconomic differences.—Marty Levine