Emmett Till and Trayvon Martin: Symbols of the Evolution of Racism 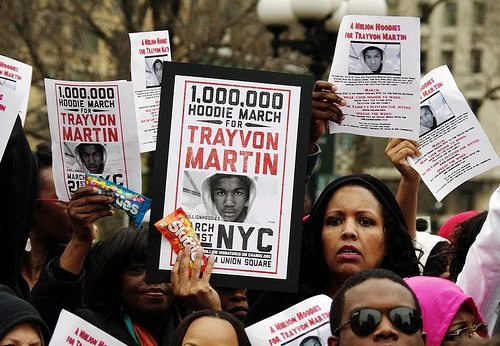 It’s not a surprise that the news media, the Internet, and pundits everywhere have either likened the killing of Trayvon Martin to that of Emmett Till in 1955, or have done just the opposite, arguing that there is nothing in common between the two cases. The similarities in their basic stories cannot be denied: both were African-American boys in their teens who had gone to grocery stores to purchase something completely mundane, both were doing something that someone deemed to be wrong or inappropriate, both were killed, the killers in both cases were found not guilty, and a national uproar followed both verdicts.

The morning after the verdict was handed down, this writer happened to be in the middle of a weekend-long retreat of emerging leaders in the African-American community. Using a very formal structure, we invited the participants in this workshop to share their feelings and reactions to the verdict. What came out was overpowering. Respondents were ashamed of the country in which they were raising their children, wondering how they can promise them a safe community. They were frustrated with what appeared to be a major retreat in civil rights in this country. They spoke again and again of white privilege and ghetto mentality. To me, the verdict handed down had been about guns and violence. To them, it was about race.

In an article first posted at PhilanTopic, but that has been appearing around the Internet, Elijah Anderson, a professor of sociology at Yale University, wonders if Trayvon Martin will become the Emmett Till of our times. His argument is that the reasons why these two young men were killed are both rooted in the American racism that finds its roots in slavery, but that in the two cases, racism manifests differently. Because of my experience at the retreat, this was a particularly interesting story.

In Emmett Till’s case, Anderson argues, the racism is flat-out race hatred: whites are superior as a race, and “blacks are an inherently inferior race, a morally null group that deserves both the subjugation and poverty it gets.” Trayvon Martin’s killing, Anderson argues, is based in a racism that is part of a more nuanced response to racial differences. Rather than seeing African Americans as inherently inferior, now the reaction comes from the assumption that they come from an inner-city, ghetto environment. To many white people, he argues, the ghetto is a scary place where poverty is rampant, and crime and violence are everyday occurrences. It is where rap music comes from. Anderson calls it the “iconic ghetto” and the assumption is that if you are black, you are from the ghetto.

America has come a long way, having re-elected a black president, and being strengthened by an African-American middle class that is more numerous and stronger than Emmett Till could ever have imagined. We have made great strides, Anderson argues, but there is still a lag, as the image of the iconic ghetto persists, and people of color still must prove that they are not from there.

Around the Internet, others say that there is nothing similar about these two cases. Some argue that Emmett Till was lynched, and that makes it different and worse, and so helped spark the civil rights movement. Trayvon Martin was shot in self-defense. Several sites are using the Martin case to prove that there is, in fact, no racism in America anymore, with one site going so far as to say those who are arguing racism in the case are actually leftists trying to wipe out years of civil rights progress.

Will Trayvon Martin’s death spark a new wave of a civil rights movement and be this era’s Emmett Till? Only time will tell. It is certainly the case, however, that it has brought the issue of color and prejudice to the fore; people are talking about this case in terms of race. Not just the people in the retreat, but even President Obama said that Martin could have been him, a reference to his ethnicity that is rare in his speeches. The verdict even seems to suggest that we believe it is okay to have a violent reaction when we feel threatened. Using Andersen’s image of the iconic ghetto, just seeing a young man who might be black in a hoodie triggers that fear. This is an issue that is burning in the community, and nonprofits will need to understand it and figure out how to respond.—Rob Meiksins