Equitable Development: One Example in ONE DC 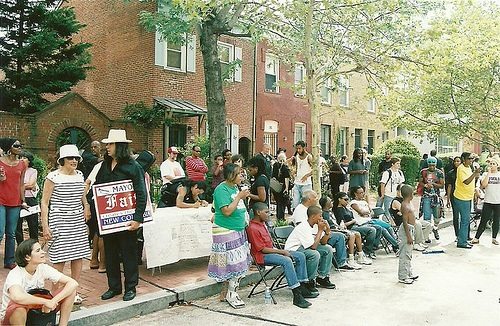 Equitable development is defined as development activity with a triple bottom line, taking into account the interests of the business community and local developers, fairness in the treatment of employees, and sustainability in protecting and enhancing resources (human and others) in responding to an array of social and environmental needs. There are many communities throughout the U.S. experimenting with these principles, and one such project that offers a manifestation of this burgeoning “equitable development” movement is ONE DC (Organizing Neighborhood Equity DC) in Washington, D.C.’s Shaw neighborhood.

Shaw has become a very hot real estate market in Northwest D.C. in recent years. Located north of M Street and south of Florida Avenue between North Capital and 7th, Shaw was a center of D.C.’s Black Renaissance from the 1920s through the 1940s where Duke Ellington, Langston Hughes, and other notable African Americans lived. The violence and civil disobedience of the 1960s cost the community many of its businesses and residents, and few chose to move into the area for decades. But in the nineties, Shaw, like many other neighborhoods close to downtown central business districts in cities across the country, began to see an influx of new residents, many of whom did not look like most current or former residents.

Since 1990, the black population of Shaw dropped from 89 to 45 percent of neighborhood residents as the share of whites grew from six to 28 percent. Hispanics increased their share from three to eight percent while the Asian population grew from two to seven percent. Not only is the population paler, it is becoming richer. Median family income grew from $21,212 to $65,162. Such gentrification—many with ONE DC prefer the term “displacement”—is not unique to this community. The District generally, including several longtime distressed neighborhoods, has become whiter and wealthier. But Shaw is one where local residents have organized in efforts to ensure that they benefit from and are not displaced by development activities.

By engaging in what ONE DC refers to as “participatory democracy,” this membership-led organization is confronting several powerful private and public entities to protect residents’ interests. Its strategy, as stated on the organization’s web page, is one where “people within movements for social change, those directly affected by the issues, make the decisions related to the campaign or movement; minimize hierarchy within their organization to maximize shared power and equity of voice; and utilize direct action as an effective means to compel decision-makers to implement decisions made by the community.”

The overarching goal is not simply reform but institutional change and social transformation. This is not some vague call to arms. There are specific objectives including, again from the web page, “human rights to affordable housing, living wage jobs, and equitable development.” Four recent campaigns are illustrative.

As a precursor of things to come, eight years ago ONE DC organized Kelsey Gardens tenants in 54 units (at 7th and P) who were about to be displaced by a church planning to redevelop the property it owned, usurping the residents’ first right to purchase their property. Tenants were educated about their rights to purchase their homes and, with legal assistance from Bread for the City and the law firm of Hogan & Hartson, won the rights to affordable housing at the same location for the next 50 years, a $250,000 cash settlement distributed among the tenants, and $10,000 each for relocation costs.

Foreshadowing the Occupy Wall Street movement, in 2010, ONE DC and other supportive civic groups built a tent city and occupied a development site (Parcel 42, 7th and Rhode Island Avenue) in protest of the District’s refusal to implement an affordable housing plan to which it had previously agreed. For two months, more than 200 residents camped out in the tents. In response, Councilmember Michael Brown proposed the Increase in Housing Affordability Act of 2011. The bill requires that, for all funds the District allocates for affordable housing development:

This will not solve the District’s affordable housing problem, but it could be an important step in the right direction.

Meanwhile, in conjunction with other groups, ONE DC is recruiting and training neighborhood residents for 500 jobs with the Marriott Marquis Hotel project, currently under construction on the site of the former Convention Center at 9th and Massachusetts Avenue. ONE DC is working with many area residents who are seeking jobs, several of whom are often difficult to place, including ex-offenders and former substance abusers, in efforts to bring jobs and economic opportunities to communities most in need.

Perhaps its most significant achievement to date has been the community benefits agreement ONE DC signed with two local developers, Ellis Enterprises and Four Points, for the redevelopment of Progression Place at 7th and S. In return for the community group’s support for the project with the D.C. government, the developers made several commitments. They agreed to set aside 20 housing units for families with incomes below 50 percent of the area median income and 31 of the housing units for families with incomes between 50 and 81 percent of the area median income. They agreed to set aside 2,000 square feet of retail space to be made available at below-market rates for five years. Hiring goals call for 51 percent of new hires to be D.C. residents.

So far, 62 jobs have been created, with 45 going to D.C. residents, including 17 to residents of D.C. public housing complexes. And a $750,000 community benefits fund was created for investments to be made for services to be determined by area residents. Initially, these funds are earmarked for a range of community-based initiatives that include Shaw youth after-school programs and support for Shaw-based tenant organizations.

None of this comes easy. Housing affordability persists as a major impediment for working families who would like to live in the District, even with the set-asides ONE DC has negotiated. ONE DC faces challenges in recruiting and training workers for the jobs at the Marriott. And the absence of legally binding requirements in the community benefits agreement has made it more difficult to achieve all of the objectives.

Equitable development principles hardly dominate urban and metropolitan economic revitalization today. But these ideas are increasingly creeping into development policy and practice, including through community benefit agreements. “Smart growth,” “sustainable development,” and other innovative approaches incorporate equitable development ideas. Whether ONE DC becomes a transformative agency for institutional change in D.C. remains to be seen. But it certainly bears watching.

Dominic T. Moulden is the resource organizer of ONE DC. Gregory D. Squires is a professor of sociology at George Washington University. The full version of this article originally appeared in the Fall 2012 edition of Social Policy.