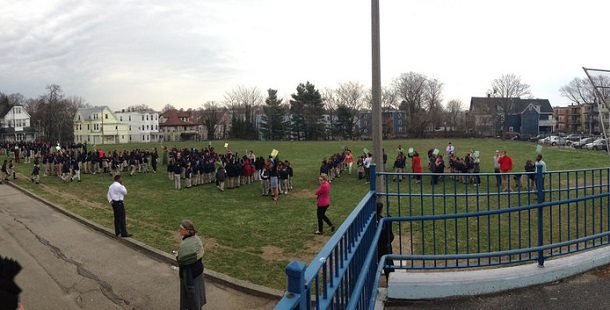 It is sad when what should be a feel-good story ends up with our having to cross our fingers and hope it turns out all right. In December of 2014, a teacher in a Massachusetts charter school, Nicole Bollerman, entered an online contest called #WishForOthers. Bollerman’s wish was for every student in her third-grade class at UP Academy in Dorchester could go home at the December break with a book in their hands. She won the award and promptly gave all of her students, many of whom are impoverished and some homeless, copies of the new book in the Wimpy Kid series, Where the Wild Things Are, and My Father’s Dragon.

The story gets better. The sponsor of the contest was CapitalOne Bank, and they granted Bollerman $150,000, which the teacher immediately turned around and donated to her school—all of it. The story, of course, was covered by the local press and the local TV news, and that naturally got the attention of some talk shows. Bollerman was invited to appear on Ellen DeGeneres’s show. Unbeknownst to Bollerman, Ellen had sent a team to her school and had the students on camera as each one (all 700 students at the school) was given a backpack filled with school supplies, and teachers were each given gift cards for Target in honor of the amount teachers are credited with as unreimbursed expenses for their classrooms and students. Finally, DeGeneres gave Bollerman an aquarium full of Skittles (her favorite candy) and a check for $25,000. Bollerman has said she would use the money to pay for continuing education to make her a better teacher. It’s a story we can all smile about.

All roller coasters have a downhill slope, and that began for Bollerman when CommonWealth Magazine published an article bringing to light some analysis that all of this may have violated state ethics laws governing gifts that can be received by public servants. Given the title (“No Good Deeds Go Unpunished”) and the general tone of the article, it does not seem that the author’s intent was to criticize Bollerman in any way. It does point out that the law states public servants cannot receive gifts worth in excess of $50.

At issue seems to be whether or not Bollerman received these gifts in her capacity as a teacher. Clearly, the law is intended to make it impossible for anyone to buy a grade from a teacher, or a similar favor from any other public servant. As has been pointed out, in Bollerman’s case, neither CapitalOne nor Ellen DeGeneres stand to benefit in any way from what they have given. The case is similar to another recent incident in which four firefighters had to decline Caribbean cruise vacations presented to them by DeGeneres after they saved a dog from a frozen pond. In that situation, it was deemed a violation of the ethics rule because they were being rewarded for something they had done while on duty. In Bollerman’s case, there may be some leeway because she entered the contest on her own time and as a general citizen.

Scans of news articles do not reveal any imminent action that may be taken against Bollerman, and responses from around the Internet are almost unanimously supportive of her act of kindness to her students. Apparently, she has been told that she can no longer speak in public about the incident until it is settled. It remains a reminder to us all that even an act of sincere and quite overwhelming generosity may inadvertently run afoul of well-intentioned laws. This is particularly true in situations where public funds and public trust are involved, such as public schools, even if they are nonprofit organizations like the charter UP Academy.—Rob Meiksins