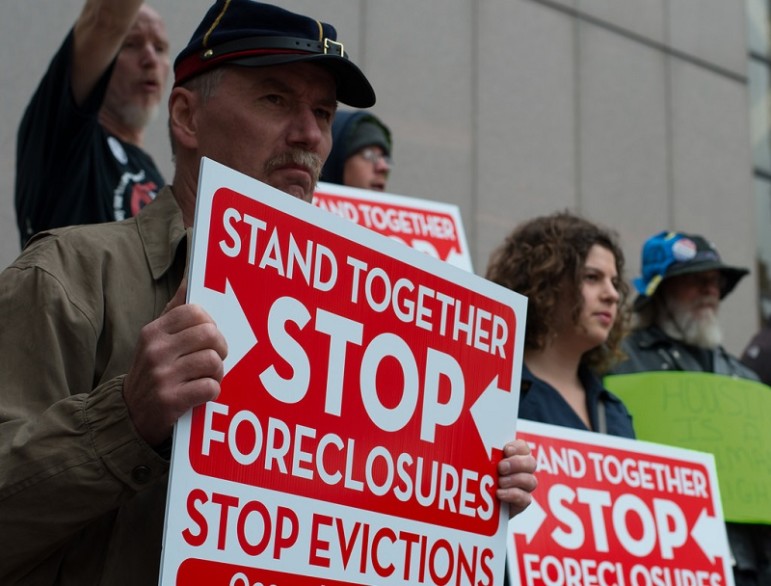 This week, National Public Radio (NPR) featured three linked stories about D.C.’s Housing Court which drive home the point that lack of affordability can propel households into a downward cycle that begins in eviction court and has consequences that ripple through society as a whole. According to a new study by the National Low Income Housing Coalition called “The Gap,” the rapid rise in rents at a time of income stagnation continues to be a national problem. While the study captures the data, the NPR series captures the stories in the microcosm of the District of Columbia.

In “Low-Income Renters Squeezed Between Too-High Rents And Subpar Housing,” NPR documents the problem of substandard living conditions as a feature of rent-burdened households. In order to cover their heads in a place they can call “home,” many households end up accepting dangerous physical conditions and overcrowding. The subject of the story is Terrell Walker, whose home is beset by drafty windows, bedbugs, and too many people in too small a space. Unspoken in the story is the specter of possible lead poisoning in the 50-year-old property. Lead was not outlawed until 1978 and could be lurking beneath layers of chipping paint around the faulty windows. NPQ reported earlier this month on an initiative in Cleveland to address lead poisoning in residences and its continuing harm to children in poverty.

In “Living From Rent To Rent: Tenants On The Edge Of Eviction,” NPR shows how tenants who have a family emergency can end up being thrown out of their homes. The Limes family profiled in the story is portrayed as typical of many who end up in eviction court.

She’s a single mother, juggling things on her own. She says the father of one of her children is in prison and the other is a deadbeat dad. She lost a full-time job last October; her new job is only 20 hours a week. At $10.50 an hour, that’s not nearly enough to cover her $1,275 monthly rent.

Later, the story notes that she had been caring for her father, who recently passed away. The loss of his income may have been the trigger that pushed household finances out of whack.

The NPR story that aired on March 28th, “Welcome To Rent Court, Where Tenants Can Face A Tenuous Fate,” recounts the operations of D.C.’s Rent Court. Several themes emerge.

Previous Nonprofit Quarterly stories have already chronicled Baltimore’s rent court and efforts by community organizations to demand reforms to the court system. (NPQ has also covered the challenge of affordability, in small towns in Pennsylvania and big coastal cities.) While court reform would not solve the affordability crisis, it could go some way towards reducing involuntary displacement and restore some faith in the judicial system. In Matthew Desmond’s ground breaking study of eviction, the Harvard sociologist recommends universal representation for tenants in eviction courts as a fundamental step to redress the imbalance that is inherent is a system where most landlords have legal representation or have developed an in depth knowledge of eviction court proceedings from years of experience. Besides providing legal services to tenants in eviction court, some other steps that could be implemented:

Legal reforms like “pay to stay” would create a statutory grace period during which a tenant could find funds to prevent an eviction. In Ohio, for instance, the limited emergency funds are often used to facilitate relocation instead of staying in place because Ohio, like many states, doesn’t permit tenants any time to correct a non-payment situation. Landlords are under no obligation to accept a late payment after issuing a “notice to vacate.” Another solution would involve reworking HUD’s “Rapid Rehousing” funds into support for preventing eviction could save many households from disruption due to temporary financial crises.

While eviction reform is not the answer to the affordability crisis, it can be an interim intervention that contributes to household stability. But there are other remedies that need to be reclaimed from the history books of social policy.

Eviction is the beginning of the downward cycle that Desmond describes:

Losing your home and possessions and often your job; being stamped with an eviction record and denied government housing assistance; relocating to degrading housing in poor and dangerous neighborhoods; and suffering from increased material hardship, homelessness, depression and illness—this is eviction’s fallout. (Evicted, p. 298)

Nonprofit leaders are urged to visit the eviction courts in their communities and then apply their compassion and their ingenuity to the problem of this system. For too long, eviction court has been the sole domain of lawyers and judges.—Spencer Wells