Forced Arbitration Is Out at Google: A Labor Win for the Little Guys 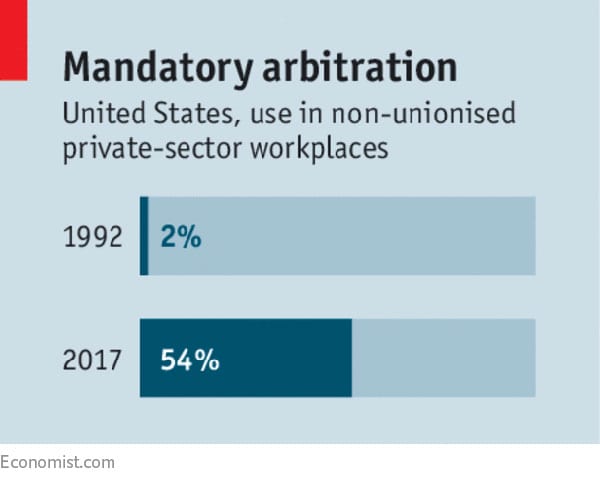 You just got a new job. It’s your first day. You spend hours signing papers in the Human Resources Office. Four years later, when you have a grievance over your wages or hours or harassment from your supervisor, you are told that you have no right to bring legal action against your employer in court. Your only option is mandatory arbitration, with your employer choosing the arbitrator. Why? Well, you agreed to it when you signed all those papers on your first day of employment.

This is not an unusual story for many employees. In 2018, the US Supreme Court ruled five to four in Epic Systems Corps v. Lewis that companies could mandate individual arbitration and disallow group arbitration or any legal court action in workers’ wage, hours or other employment disputes. So, the path for employees seems narrow with little light at the end of the tunnel. But not so, for the employees of Google who joined together and stood up to mandatory arbitration and succeeded. Perhaps.

First, from Rebecca Koenig at US News & World Report, here’s a bit more background on mandatory or forced arbitration, without being too wonky.

Arbitration shares some similarities with the public court system. Both involve two disputing parties arguing their cases before a third party, which decides a winner and awards damages.

But there are key differences. Court cases tend to move more slowly than arbitration cases, which are often more efficient. Court cases are matters of public record, leaving paper trails that anyone can access, while arbitration cases are private and under no obligation to release information. Some employers take this privacy a step further, requiring workers to sign nondisclosure or non-disparagement agreements and keep proceedings secret.

The other key difference between court cases and arbitration cases is in who wins most often. The answer is the employer. A study from 2015 found the employee win rate to be 35.7 percent lower in arbitration than in federal court, and damages awards to employees were also lower. There is a difference in appearing before a jury of your peers than before an arbiter, who is most often paid by the employer and brought back for other arbitrations when the findings are to the employers’ liking.

This process also does away with class actions. Determining each employment dispute on a single, one-time basis not only slows things down, but also leaves the remedies in much smaller amounts than when a group or class sues a company in court. Is it any wonder that employers are lining up in support of mandated arbitration?

But, a ray of light appeared last week after some very determined Google employees rode in like the cavalry. Following months of protests by thousands of these workers, Google agreed to stop requiring its workers to submit to forced arbitration in employment disputes. At first, the agreement was to only cover sexual harassment disputes, but it now will cover most employment issues such as wage theft, discrimination, or other areas. Google employees can take their disputes to court and can file class action suits.

Applause all around—to Google for being a role model for other companies, and to Google employees for their perseverance in protesting and staying the course to get to this place.

But is this all sunshine now? According to Terri Gerstein, writing for Slate, we don’t quite know yet just how Google will offer employees this new option.

Will prospective employees be given information about this choice as part of a job offer and have time to consider the options, or will it be hastily communicated on the first day of work along with a mountain of human resources forms to complete? Will it be buried in minuscule print somewhere, with legalistic and inaccessible language? Will there be a default selection of arbitration (so that employees have to opt out in order to preserve their access to courts), or a default selection of court access (so that employees have to affirmatively choose arbitration)? Or no default at all, just two options? Will workers have a one-time opportunity to opt out of arbitration, or will they have the option at a future date to change their selection? And if there’s an option to change, will that be ongoing, or an annual opportunity (as occurs with health insurance enrollment)?

Ideally, workers would be given plain language, reasonable fonts, and accessible information about arbitration and other aspects of their employment contracts well before day one on the job, with no default favoring arbitration and the opportunity to opt out in the future.

The bottom line is that there is more work to do—not just at Google, but at companies and with employers, large and small, for-profit and nonprofit—when it comes to employee disputes and how they are handled. For Google employees, the answer was in standing together and not backing down (and these were not union employees). Others should pay attention. Forced arbitration is not seen as being in the best interest of the “little guy,” and it would be hard to make that case to most employees. Hiding it in the middle of a stack of employment documents may not work as employees become savvier and get advice about what to look for. So, finding other options to replace forced arbitration seems like a good idea before the lessons learned from Google employees go viral.—Carole Levine

Correction: This article has been altered from its initial form to correct the publication for which Rebecca Koenig writes.

The Contingent Faculty Movement as a Social Movement