Free to Speak, but Who Is Talking—The ED, The Board, or the Nonprofit Itself? 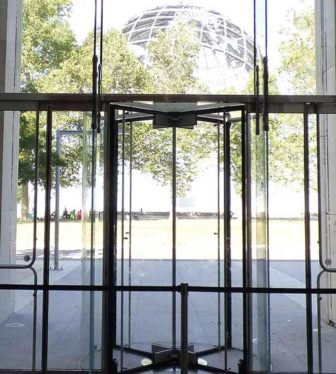 The Queens Museum of Art lives in a large building built for the 1939 New York World’s Fair on what was also the 1964–65 World’s Fair grounds in Flushing Meadows, Queens, within sight of the huge Unisphere landmark. As a community, Flushing is diverse: 67 percent Asian, 14 percent Latinx, 11 percent white, and 4 percent Black. It’s also a well-educated community, with 90 percent of the community ranging between having some college to graduate degrees. The museum’s mission statement says, in part:

The Queens Museum presents artistic and educational programs and exhibitions that directly relate to the contemporary urban life of its constituents while maintaining the highest standards of professional, intellectual, and ethical responsibility.

The museum’s executive director, Laura Raicovich, announced on Friday that she was stepping down after serving three years. Raicovich has been walking the thin line between general policy support and specific advocacy in a very public way for her entire term. Last year, she closed the museum on Inauguration Day, to her board’s chagrin. (The museum suggested to the public that they make protest posters and banners on that day.) That summer, Raicovich cancelled and then reinstated an event sponsored by the Israeli government after the museum was accused of anti-Semitism. (There was an investigation, although the results have not been made public, and two officials from NYC demanded she step down.) And more recently, as part of a proposed collaboration with other organizations, Raicovich recently asked the board if the museum could become a sanctuary space to bring in social services for immigrants. She said, “It was made very clear to me that that was not something that was of interest.”

“There are so many big things that art and culture have to contend with that are so wrong in the world,” Raicovich said in a telephone interview with Robin Pogrebin of the New York Times. “That’s where my focus and energy need to be, and at the end of the day, I just felt that my vision and that of the board weren’t in enough alignment to get that done.”

Racovich believes that advocacy plays a role in her position. She has tweeted her support for DACA and held events in people’s homes for members of the museum’s immigrant audience who were afraid to come back to the museum after the election of Donald Trump. Her Twitter page identifies her employer.

The museum’s board was complimentary in the announcement of Raicovich’s departure, pointing out that she had doubled the museum’s capacity to fundraise. The board chair, Mark J. Coleman, provided a statement announcing the immediate search for a replacement: “Laura brought a vitality and dynamism to her work, and was fearless in exploring new ideas and perspectives through art.”

“I’m very proud of what I was able to accomplish at the Queens Museum,” Raicovich said this week, “but I feel like I’ve had three successful years; it’s time to go to the next level and do something else and continue to focus in a way that maybe can’t be accomplished there.”

The Queens Museum of Art is not the only organization with an executive director who has faced decisions in which political conflicts have led to resignations. The executive director of the Walker Art Center in Minneapolis, Olga Viso, left after Dakota tribal leaders protested the exhibition of Sam Durant’s work, which was suggestive of the gallows.

There are multiple layers in the decision-making process when it comes to policy position statements, besides applicable state and federal nonprofit laws. When executive directors speak, it is important that they make it clear on whose behalf are they speaking: themselves, the community their nonprofit organization serves, or the organization and its board?—Marian Conway

Correction: An earlier version of this article referenced an article from the New York Times addressing the departure of the inaugural director of theInstitute of Contemporary Art at Virginia Commonwealth University. After communication from a representative of the ICA, that reference has been removed.