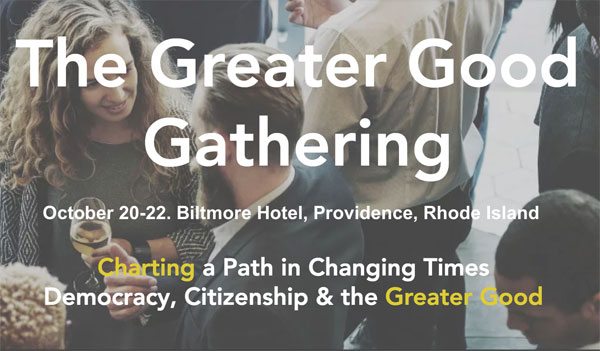 Many NPQ readers know that their fellow activists are in search of new forms for collectively achieving social good, ones less likely to replicate the very problems we seek to address and more likely to bring about the future we wish to create together. Last weekend, in Providence, Rhode Island, a discussion took place that we thought we ought to sit in on: A group of students, academics, business leaders, and activists, most either students, faculty, or alumni of Brown University, came together for what was proclaimed the inaugural Greater Good Gathering.

Organized by Eric Schnurer, a journalist, social critic, public policy consultant, and Brown alumnus, the conference aimed to look “deeply and cross-disciplinarily at how the means for addressing and promoting the Greater Good may be changing in today’s world—and that includes the ‘technology’ of how we, as multiple individuals, collectively interact and govern ourselves—and how to address and adapt to those changes.” In short, the conference sought to explore what it means to pursue the public good—and how to do so—in the twenty-first century.

A common thread of the conference—sometimes made explicit, but more often implicit—was seeking ways to address the obvious disconnect between the macro and micro. In short, even as our ability to address individual social problems seems to be improving, our ability to organize society democratically as a whole to achieve beneficial social outcomes appears to be waning against the scale of threat.

Many NPQ readers are familiar, we suspect, with arguments about declining social capital, an argument made famous by Harvard political scientist Robert Putnam. This theme was touched on by many conference participants. But before diving into that, it is perhaps worth noting some of the innovation on display.

In terms of the broader themes of the conference, the opening keynote speech from Martin Luther King III, son of the late Rev. Dr. Martin Luther King., Jr., set the tone by addressing the range of types of violence visited upon low income communities and the need to overcome lethargy. “Hurt and harm are more than physical violence and brute force, it is also structural violence that keeps food from people’s tables and institutional violence that withholds access to making a living and the cultural violence that denies people the opportunity to realize their potential.” He urged involvement in creating a different future through collective activism that extends beyond large rallies and high-profile speeches.

King’s speech was followed by a panel moderated by Tracy Sefl, a communications consultant. The panel included Marc Dunkelman, a Fellow of International and Public Affairs at Brown; Fordham law professor Joel Reidenberg; Brown sociologist Michael Kennedy; and Macky McCleary, administrator for Rhode Island’s public utility division. A lot of the discussion focused on technology as a driver of change—both how it has disrupted the media environment (i.e., the end of the postwar era of three dominant television broadcast networks) and, perhaps more fundamentally the way people relate to each other. Reidenberg, for example, pointed out that in 1959, the Supreme Court decided in NAACP vs. Alabama that the NAACP had won the right to keep its membership list private to protect its members’ association rights; now, Reidenberg said, technology makes the privacy that NAACP members enjoyed hard to maintain.

McCleary took a more positive view of technology, noting that many of the social problems we see, such as police violence toward African Americans, is not new, but rather is more publicly visible as a result of the fact that “the mirror that is the media has gotten better over time.” McCleary added that as our media “mirror” gets better, the social problems become harder to solve because the easier, more visible problems were seen earlier and many have already been addressed. “Everything gets harder because it has to, but that is what left.”

Dunkelman emphasized that technology impacts relationships, because while social media is good for maintaining close ties (such as with family members) and diffuse ties (such as the broadcast ability of Twitter), it does poorly in the middle.

“What has been lost, Dunkelman said, “are middle ring relationships. That was the glue of American democracy—the PTA meeting, the coffee shop, the bowling league as Robert Putnam would have argued. Those sorts of interactions are fundamental,” Dunkelman said, to institutions like government that mediate interests. As a result, Dunkelman concluded, “the foundation [of our politics] has shifted.”

Kennedy, too, focused on institutions, but on their potential to address our current challenges. At the micro level, Kennedy called on Brown to act as a community-engaged anchor institution with a social mission.

“Does Brown live in Providence? Is it an active citizen?” asked Kennedy. “Not so sure. It’s getting better. But one of the things that is a great opportunity, to what degree could Brown partner in order to realize the democracy that is possible at the local level. I think that is happening right here right now and will happen more in the future.”

At the macro level, Kennedy said, “The key is to name problems. Social movements have stepped up. Occupy put inequality on the agenda. Black Lives Matter puts something on the agenda that people try to erase. One of the reasons we have challenges solving problems is because the problems we are dealing with require new institutions. There is something broken—we are trying to manage a system that is broken. We need to be deeper and be more courageous.”

Speaking from the audience, Johnny Mack from the Drum Major Institute noted that it’s not just government institutions that need to be rebuilt, but social institutions that can support social movements and thereby move government. “The African American community had an infrastructure—churches, radio stations, newspapers, colleges and universities, hospitals, and businesses. That framework served as the social capital that made the conversation possible.”