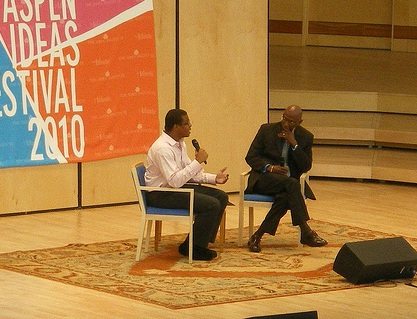 In a time when student debt is increasing and available jobs for new graduates are limited, commencement speakers for the class of 2012 have a difficult challenge ahead of them. This year, notable speakers who will step up to the podium with some mix of advice and optimism include President Obama at Barnard, Brown University President Ruth J. Simmons at her own institution before her retirement, and Jacqueline Novogratz, founder and CEO of the Acumen Fund, at Gettysburg. Today, Geoffrey Canada, president and CEO of the Harlem Children’s Zone, will address the University of Pennsylvania’s commencement to emphasize his prediction that “the most complicated and different work in this country will lie in nonfinancial areas,” a hopeful sign for the future of the sector.

In more than 20 years as president and CEO of the Harlem Children’s Zone (HCZ), Canada has become famous for his efforts to provide comprehensive wraparound education and health services to children and families in Central Harlem as a means to ending poverty. Although some have wondered whether the extensive financial resources of HCZ limit the replicability of the organization’s model, Canada and his colleagues have still positioned the outcomes that they’ve achieved as examples for the Education Department’s Promise Neighborhood initiative.

According to the Inquirer, Canada’s speech will touch on themes of leadership and the satisfaction that can come from the increasing complexity of nonprofit work. Certainly, Canada’s challenges as a nonprofit leader are fairly unique and not representative of the issues faced by most executive directors nationwide. Canada told the Inquirer that it’s not uncommon for him to go “from sitting with a parent because they’re worried their son will get shot, to sitting with a billionaire who is thinking it would be smart to help my organization, just minutes apart.” Still, the success that he has had carving out a vision for his organization is undeniable and his story could serve as an entry point to the field for some graduates. Highlighting an underlying theme of his speech, Canada told the Inquirer, “I want to dispel the belief that if you’re really smart, where you are needed are areas that tend to be more lucrative.” What impact do you think this nonprofit pitch will have, and who would you most want to hear a commencement address from? –Anne Eigeman