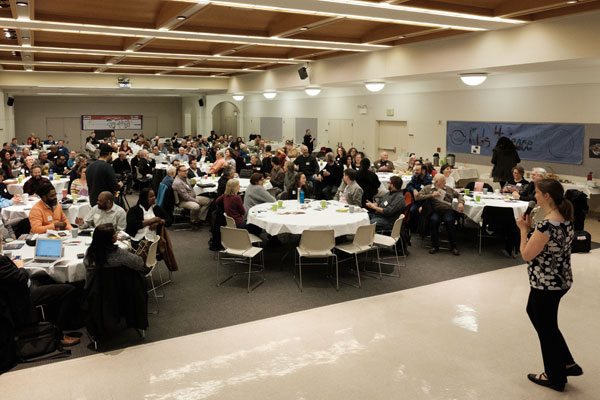 Earlier this month in Cincinnati, Ohio, roughly 150 worker co-op and union activists came together for the Third Biennial Union Co-op Symposium. This conference marked a watershed of sorts, as the union co-op idea is increasingly seen by both union and co-op activists as a vehicle for community transformation. At the conference, leaders announced their intent to form a national network organization in the coming year. Participants also explored developing new debt and equity investment vehicles to expand the pace of development nationwide.

The idea of a unionized worker co-op may seem odd. By definition, worker co-op members own the company for which they work. You can’t really go on strike against yourself, for example. But unionized worker co-ops in the US have a proud history. In the 1880s, the Knights of Labor, then the leading US trade union with over one million members, not only had members in traditional companies but its members operated over 200 worker co-ops. In Minneapolis-St. Paul alone, according to historian Steve Leiken, there were 32 worker co-ops. In Leiken’s account, a combination of insufficient solidarity within the co-op sector and opposition from outside the sector ultimately led to the sector’s demise, but “for a few years in the 1880s, the cooperative coopers of Minneapolis dominated an entire industry.” Some of the worker co-ops formed remained in business for decades, but the links with the labor movement weakened over time.

The unionized worker co-ops of the latest nineteenth century in the US were motivated by a producer ethos, or what Leiken has called the citizen producer. The reasons why worker co-op members unionize today are different. One is to secure better group benefits, which a larger organization that represents workers at multiple businesses can provide. Another is to have more of a political voice. For example, the Bronx-based Cooperative Home Care Associates (CHCA), the largest worker cooperative in the US with over 2,000 workers, affiliated with the Service Employees International Union (SEIU) in 2003 because, as the New York Times reported, “they were impressed by the union’s success in lobbying Albany for more home care dollars.”

A third, and perhaps most fundamental reason why workers at some co-ops choose to unionize is to help them balance their interests of workers-owners qua workers (e.g., benefit policies) with their interests of worker-owners qua owners (e.g., generate profit payments for the worker-owners). As Rob Witherell, who works for the United Steelworkers union and has helped popularize the union-co-op concept, explained in an interview I conducted four years ago:

If we are talking about scaling up and applying this to a larger workplace, say, of 100 people, how does a cooperative maintain the accountability that is intended? Because voting for directors and having an annual meeting is a good step, but that only happens once a year. How do you maintain that accountability on a day-to-day basis? This is where we see the union structure and collective bargaining making a lot of sense.

Some unionized worker co-ops have been around for a while. This includes CHCA, mentioned above, but also includes, as co-op developer Hilary Abell explains, some that rose out of labor struggles, in which workers who had fought employers ultimately took over the companies. Such is the case with a small western Massachusetts copy store chain (Collective Copies) and a cab company that employs over 200 drivers in Madison, Wisconsin (Union Cab). Printing co-ops have also often unionized, since the union label makes it possible for the businesses to obtain printing contracts from union buyers. A partial list of union co-ops is available <a href="ttps://uswo