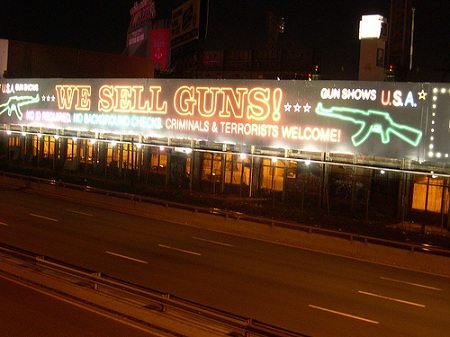 Inspired by the horrific mass shooting at the Sandy Hook Elementary school in Newtown, Conn. on Friday, a gun control petition has broken the record for the most number of signatures on the White House’s “We the People” petition website. The petition asks the White House to “immediately address the issue of gun control through the introduction of legislation in Congress.” As of early Tuesday morning, more than 174,000 people have signed the petition, which states, in part:

“Powerful lobbying groups allow the ownership of guns to reach beyond the Constitution’s intended purpose of the right to bear arms. Therefore, Congress must act on what is stated law, and face the reality that access to firearms reaches beyond what the Second Amendment intends to achieve. The signatures on this petition represent a collective demand for a bipartisan discussion resulting in a set of laws that regulates how a citizen obtains a gun.”

The White House’s We the People website is an experiment in some form of direct democracy, as the White House has pledged to review any petition that reaches 25,000 signatures. As NPQ recently noted, that included a “review” (though we imagine it may have been a cursory review at best) of several petitions to secede from the union after President Barack Obama’s recent reelection. A number of those secession petitions met the 25,000 signatures benchmark, but no petition on the White House site has experienced the record-breaking outpouring support that the gun control petition has found. As NPQ noted yesterday, the nonprofit voices of the powerful National Rifle Association (NRA) and the Brady Campaign to Prevent Gun Violence have very different takes on gun regulation in America, but it is clear that the terrible killings in Newtown have brought the issue to the forefront.

Based on several of his recent public statements, it doesn’t sound like this petition will need to convince its recipient, President Obama, that the nation needs to revisit its gun laws. In that sense, it would seem that the petition is largely preaching to the choir. However, if the president and allies from both parties in Congress are serious about new gun legislation, they will need a walloping showing of public support to bat back the criticisms of the NRA and its allies, which are relatively quiet in the wake of tragedy right now, but which will almost surely grow louder if and when a legislative proposal is on the table.

The Nation notes that the “We the People” petition isn’t alone and points to petition efforts like that of Staci Sarkin on SignOn.org, a site operated by MoveOn.org. As of early Tuesday morning, the petition had more than 360,000 signatures. Looking at the recent trauma at Sandy Hook Elementary and the call for a response, The Nation’s Ari Melber asks, “Will this time be any different?” Melber suggests that the political leadership on this issue will need to move up “from the bottom up,” which is certainly the aim of these growing petitions. –Mike Keefe-Feldman