Harder Than It Sounds: Nonprofits Push Earplugs at Loud Concerts 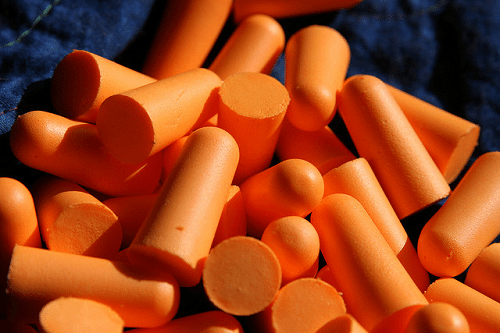 In rock and roll circles, Athens, Ga. is perhaps best known as the home of R.E.M., though it has also given birth to the B-52s, Widespread Panic, Matthew Sweet and others. It’s well known that Athens likes to rock. Perhaps less well known is the impact that repeated exposure to high-decibel rock and roll has on the hearing of musicians and frequent concert-goers. Enter We’re hEAR for You, a nonprofit dedicated to “increase[ing] awareness of noise-induced hearing loss, hearing loss prevention, and the use of earplugs among the community.” As it prepared for a benefit concert, We’re hEAR for You (WHFY) was recently profiled by the Athens Banner-Herald.

WHFY operationalizes its mission by distributing free earplugs at concerts, offering free hearing screenings at the University of Georgia Speech & Hearing Clinic, and raising awareness of this often-overlooked concern. In light of the fact that no two ears are exactly alike, it even offers custom earplugs for musicians. The nonprofit was founded in 2009 by speech-language pathologist Caroline DeCelles and music business professional Katie Carmody. In an interview with the Red & Black, which serves the University of Georgia, DeCelles noted that the organization is trying to “break [the] misconception” that earplugs are for shutting the music out entirely: “If you reduce a 110 decibel concert to 80 decibels, you can still hear very, very well.”

WHFY isn’t the only nonprofit working in this field. Since 1988, Hearing Education and Awareness for Rockers (HEAR) has focused its education and outreach efforts on “the prevention of hearing loss and tinnitus among musicians and music fans (especially teens).” Like WHFY, HEAR’s website hits on the importance of custom-fit ear plugs, at least for those who are around loud music on a regular basis. HEAR notes that standard, non-customized earplugs often make it hard to hear speech clearly and “make the wearer’s own voice sound hollow,” which leads some people to abandon using earplugs altogether.

There’s no question that the science supports the work of WHFY and HEAR, but these nonprofits still face an uphill cultural battle, given that some musicians and rock music fans consider wearing earplugs a little less than cool. The Internet is full of message board discussions about earplugs, some of which include comments like this one (from a message board for the band the Gaslight Anthem):

“I’m with you on not wearing them [earplugs]. I’ve always been told I should, but I find them uncomfortable and I feel like I’m missing out. I love loud music, and unfortunately I think the damage that’s been done to my hearing just enforces the cycle of even louder music/more damage as time goes on. I keep telling myself that by the time I’m really old there will be a good, easy fix to hearing loss, but being proactive would be smarter.”

Nonprofits focusing on education and awareness operate on the fundamental logical assumption that if you know the facts and the facts say that something is bad for you, you’ll be inclined to stop doing it, but as the comment above illustrates, that’s not always the case. Some rock and roll fans likely eschew earplugs precisely because it defies logic and the basic principles of self-preservation. In this way, what looks like a pretty simple nonprofit mission (getting earplugs into ears at loud concerts) may actually be much harder than it would appear at first glance. –Mike Keefe-Feldman