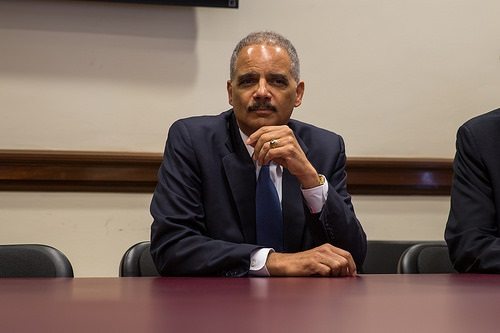 While there have certainly been some major criticisms of Eric Holder as Attorney General of the U.S., and we will cover those in the next few days, there is no doubt that he has helped to move the dial on a number of criminal justice and civil rights issues.

After serving six years in the U.S. Department of Justice, Attorney General Eric Holder announced two weeks ago that once his position had been filled, he would resign. House minority leader Nancy Pelosi relayed the news of Holder’s resignation to a stunned audience at the Congressional Black Caucus Foundation. Indeed, following Holder’s tenure as a civil rights advocate and the first African American to serve as attorney general, many are concerned what the resignation will mean for the future of the Department of Justice and justice advocacy.

For some, Holder’s resignation did not come as a surprise, as he had been rumored to be leaving following the controversy surrounding the government’s surveillance of journalists. Indeed, he was clear that he would not be staying the duration of President Barack Obama’s second term. However, for others, surprise or not, the resignation means an uncertain future for civil rights advocacy. Throughout his six-year term, Holder was an advocate for reform involving America’s marginalized groups, from LGBT rights to federal voting laws impacting minorities across the country.

Among Holder’s most prominent contributions was reducing prison overcrowding and diminishing the government’s overdependence on the prison system to combat crime, especially nonviolent crimes. Following a spike in crime rates from the 1970s, when President Richard Nixon began his “war on drugs,” to the ’90s, federal and state lawmakers reacted by mandating harsher prison sentences for drug users and repeat offenders. Last year, Holder announced the Justice Department would no longer be pursuing mandatory minimum sentences for certain nonviolent drug offenders, noting that incarcerating criminals does not equal a safer country. Holder ordered his 94 U.S. attorneys to stop charging low-level nonviolent drug offenders with crimes that would result in overly harsh prison sentences.

Part of the motivation to reduce prison overcrowding derived from the “deeply troubling report” that Holder cites, asserting that black male offenders receive sentences almost 20 percent longer than white male offenders for similar crimes. Following these efforts, this year, the federal prison population saw a drop by nearly 5,000 inmates, the first decline in decades. At the time, Laura Murphy, director of the American Civil Liberties Union’s Washington Legislative Office, said, “These policies will make it more likely that wasteful and harmful federal prison overcrowding will end.” Out of the multitude of controversies that plagued Holder’s career, his efforts to reduce prison overcrowding received bipartisan support and are expected to drastically reduce prison expenditures in the future.

In his remarks announcing his resignation, Holder also commented on his and the department’s efforts to address racial discrimination in voting laws:

“Over the last six years, our administration has made historic gains in realizing the principles of the founding documents, and fought to protect the most sacred of American rights: the right to vote.”

Judith Browne Dianis, co-director of the Advancement Project, a civil rights organization, said she “actually screamed in [her] car when [she] heard” that Holder was stepping down. Dianis’ organization has worked with the Justice Department to bring several voting rights cases to court. “I was upset, because he has meant so much to the civil rights community and to our country.”

Perhaps the greatest challenge and most devastating challenge to Holder’s efforts came following last year’s Supreme Court decision to strike down a key element of the Voting Rights Act of 1965, part of the Civil Rights Act that allowed nine states, most of them in the South, to change their election laws without prior approval from the federal government. The decision undid much of Holder’s work with the Texas ID law. The Justice Department has brought four lawsuits involving the voting laws in Wisconsin, Texas, Ohio, and North Carolina. All four suits are still pending in court.

“When DOJ decides to get involved in a voting rights case, it raises the profile,” said Myrna Pérez, deputy director of the Democracy Program at the Brennan Center for Justice. “Justice acts as the voice of the federal government in these cases, and also brings a level of national attention to what may otherwise be billed as simply a state-level case.”

Most recently, Holder ordered a civil rights investigation into the Ferguson, Missouri police department for their behavior and response during the protests following Michael Brown’s death. Soon following, Holder announced the launch of the Department of Justice’s National Initiative for Building Community Trust and Justice in an effort to repair the damaged and reinforcing the relations between police departments and communities, particularly among African Americans.

“It is hard to overstate the impact of General Holder’s tenure—but we are confident that his initiatives will endure, even under new leadership,” said Leslie Proll, director of LDF’s Washington Office. “At this critical time for America, we can’t afford to lose momentum on civil rights. Certainly the next nominee will have big shoes to fill, but we trust and expect that his replacement will be up to the task.”

However, with the Supreme Court on the verge of deciding the constitutionality of same-sex marriage, voting rights cases still in court, and mid-term elections on the horizon, some are concerned whether a successor will be able to fill Holder’s shoes as a strong African American leader in the American community and complete the work Holder has left undone for the marginalized and those in most need of an advocate.

“We always thought that he was able to say the things that Obama could not say,” said president of the Lawyers’ Committee for Civil Rights, Barbara Arnwine. “We’ve always seen him as an important spokesperson for the administration, and that role should not go unfulfilled.”—Shafaq Hasan