How to Grow a Local Nonprofit Mission to Scale: 6 Points of Practice

Maine’s 3,500 miles of coastline, with craggy peninsulas, islands and diverse geography, is considered by many to be its most valuable, unique natural resource. A visitor traversing the state via Coastal Route 1 might describe all the communities along the Gulf of Maine and its islands as quaint. But that belies the diversity of the communities, culturally and economically. Maine’s fishing and marine heritage is evident at nearly every turn.

Coastal Enterprises, Inc. (CEI) was incorporated in 1977 along this route in Bath, Maine, a small city that today has about 8,300 residents. Then, a startup nonprofit with no money in the bank, its founders had an audacious vision to expand economic opportunity for people living along the mid-coast of Maine. Its first project was to create a fisherman’s co-op in Boothbay Harbor and make a startup loan. This sparked a model of advancing economic justice that CEI has honed over the past 40-plus years in its home state and, through its subsidiaries, in rural regions across the US.

One of the nation’s first community development financial institutions (CDFIs), CEI has financed more than 2,700 businesses, providing $1.3 billion of capital, with another $2.8 billion leveraged on top of that. This combination of lending and investment activity has helped create and sustain close to 40,000 jobs and create and preserve more than 2,000 affordable housing units. Now headquartered in Brunswick, Maine, CEI employs 81 people.

CEI’s 41-year history holds lessons for community development in rural communities far beyond Maine’s borders. To get a better picture of the model, let’s take a closer look at an industry in which CEI has played a critical catalytic role—namely, Maine’s fisheries.

Like many rural, resource-based industries, fishing is prone to boom-and-bust cycles. On paper, Maine’s fishing industry may look like big business, with over $560 million in landings—that is, fish hauled in from the sea—recorded last year. In reality, it is mostly made up of a string of small businesses, often family-owned and operated. Over the years, this ecosystem of small businesses has been buffeted by global factors mostly out of its control—from climate change to overfishing to the vagaries of consumer demand.

While Maine’s landings of seafood are the third-highest in the United States, more than 90 percent of the seafood consumed in the nation is imported. Maine’s historic commercial fisheries focused on groundfish, shrimp, lobster, and sea urchins. But many of these species have disappeared. Lobster catches are currently holding Maine’s industry together.

That may be about to change. The Gulf of Maine Research Institute recently forecast that fast-warming waters could cut the lobster population in the Gulf some 62 percent by 2050. Maine’s waters have already warmed faster than 99 percent of the world’s oceans, as natural variations in the Gulf Stream and the Atlantic Ocean exacerbate warming trends.

Adjusting to change is anything but automatic. Many small, incremental shifts gradually move a community from one economic environment to another—a slow, grassroots evolution. The resilience of this industry is due in large part to the fishermen themselves. The field remains overwhelmingly male-dominated, although women’s presence in the industry is growing: close to one-in-ten fishery license holders is female. We use the term “fishermen” (or “lobstermen”—a dominant fishing industry in Maine)—because the term is used in practice by both male and female “fishermen.” Maine’s fishermen are valued for their commitment to what they know how to do best, a way of life, and an obligation to steward the environment that provides a livelihood.

Like other natural resource industries, the health of a fisheries economy is interdependent and relies on more than a biological ecosystem to survive and thrive; it depends on a community ecosystem too.

An Ecosystem Approach to Economic Development 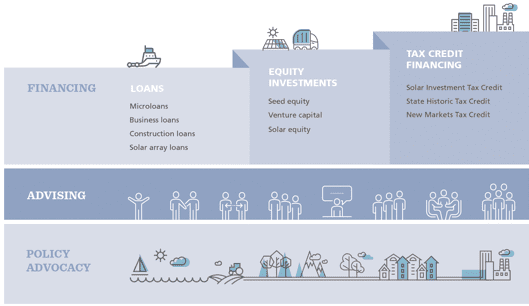 A central element of this ecosystem approach involves listening and outreach. Throughout coastal Maine, the work to transition the fisheries economy is dependent on innumerable encounters—some planned, others spontaneous.

Community organizing at its most granular level often starts with just a handful of people listening, then convening, then developing resources and information. CEI uses its mission lens to assure basic rights and tenets of social equity through policy and practice. Follow-through over the course of years builds trust and encourages leaps of faith into the future. It’s this aggregation of social capital that is vital to economic growth in rural places like Maine.

Access to capital with reasonable terms and cost is a critical factor in supporting a transitioning economy. This included making loans for groundfish boats back when that was still a viable industry. As market conditions shifted, so did financial support. CEI began making more loans for lobster boats and—through its subsidiary CEI Ventures—has f