This article comes from the Summer 2021 edition of the Nonprofit Quarterly, “The World We Want: In Search of New Economic Paradigms.”

The discovery of imaginal cells, or discs, goes back to the 1600s, but the metaphor of imaginal cells was popularized by Norie Huddle in her 1990 book Butterfly. The story of a butterfly’s metamorphosis provides a lovely and useful metaphor for the metamorphosis from a system of capitalism to a postcapitalist system: the solidarity economy (SE).

Awakening to a Different Vision

When a caterpillar spins its chrysalis around itself, a magical process begins. First, its body starts to break down into a nutrient-rich goop. Within this goop are imaginal cells, which were present all along within the caterpillar but had been dormant. These imaginal cells begin to express a genome inherited through evolution, a genome that is different from that of the caterpillar.1

These imaginal cells, in other words, have a different vision of what they can become. They are so different, in fact, that what remains of the caterpillar’s immune system views them as foreign interlopers, and attacks and destroys them.

As the imaginal cells continue to coalesce, they start to specialize into their preprogrammed expression. Some develop as an eye, some grow into a leg, some become the body, and some the wing. These pieces work together, each integrating with the others, until what emerges from the chrysalis is an entirely different creature—a butterfly.2

WHAT IS THE SOLIDARITY ECONOMY?

The solidarity economy (SE) is a big tent that embraces many coexisting visions of democratic, postcapitalist economic systems. The framework, which emerged in Latin America and Europe in the 1990s, rejects state-dominated authoritarian forms of socialism, instead affirming a core commitment to participatory democracy. Furthermore, it is explicitly feminist, antiracist, and ecological, and advocates for economic transformation that transcends all forms of oppression, not just class. In contrast to the narrow self-interest, competition, and struggle to dominate others that are at the heart of racist, patriarchal capitalism, the solidarity economy is centered on a culture of solidarity, mutuality, caring, and cooperation, including social responsibility, economic human rights, and the rights of Mother Earth. SE institutions include cooperatives (worker-owned, consumer, producer), public banks, community land trusts, alternative currencies, and time banks. 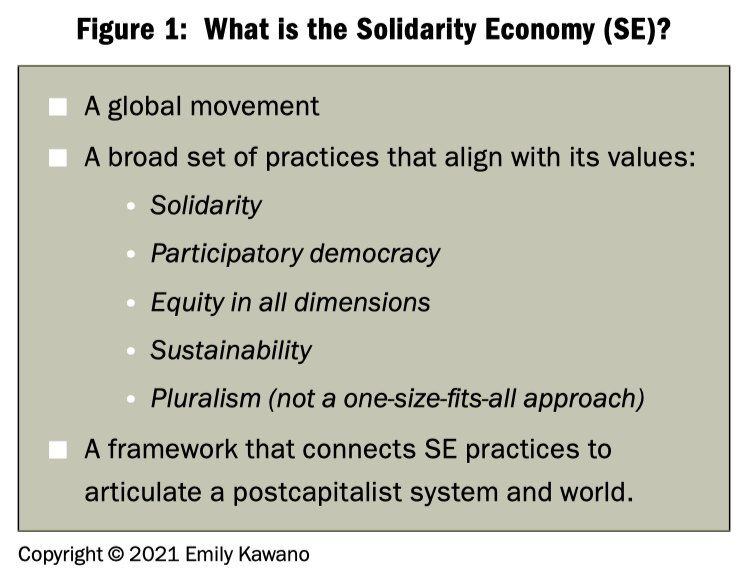 In 2013, the U.S. Solidarity Economy Network (USSEN) and RIPESS, an international solidarity economy network, led a two-year international consultation process to build a shared understanding of the framework.3 While there is a tremendous latitude within the solidarity economy to encompass a wide range of approaches grounded in the local realities of culture, language, history, political-social-economic contexts, and environment, there are elements of the definition that apply across these specificities:

AWAKENING THE SLUMBERING POTENTIAL OF A SOLIDARITY ECONOMY

The rich foundation of solidarity economy practices are like imaginal cells. Currently, they are in the equivalent of a dormant stage within the caterpillar of capitalism. However, the convergent crises of the pandemic, climate change, the racism and violence that have sparked the widespread racial justice uprisings, the economic divide, and the alarming slide toward fascism also create opportunity. People’s faith in the status quo is shaken. There’s a growing openness to new narratives, new models, and new paradigms. In this context, many of the solidarity economy’s imaginal cells are shaking off their dormancy, awakening to a different vision of becoming.

What will it take for the solidarity economy’s imaginal cells to complete the metamorphosis into a postcapitalist system that operates with a different set of values and logic? We do not need to “wait for the revolution,” because SE practices already exist all around us today. Our task is to make these practices visible, and to grow and connect them. Like the imaginal cells, we can think of three phases: (1) awakening to a different vision; (2) recognizing others as sharing a common vision, and clustering; and (3) cooperating, integrating, and emerging. 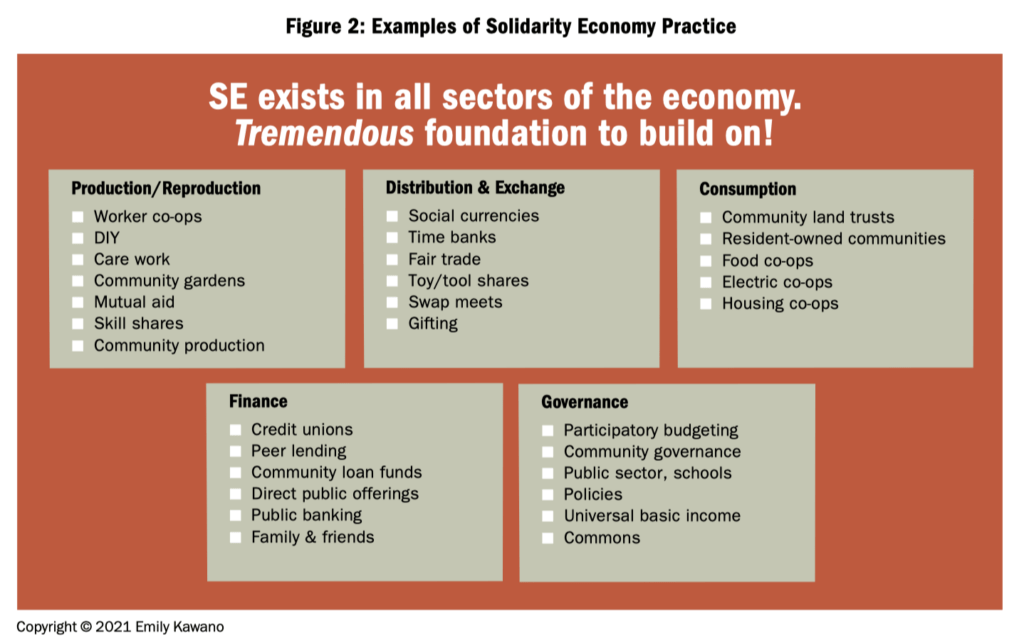 1. Awakening to a different vision

It is safe to say that the great majority of the people putting into practice the principles listed in Figure 2 do not see themselves as part of a transformative process to build a more just, democratic, and sustainable world beyond capitalism. So how is it that they can be claimed as being part of a solidarity economy?

My view is that we can identify economic practices that align with solidarity economy values—even if imperfectly, and even if these practices and practitioners do not identify with the solidarity economy—in the same way that early capitalists in the seventeenth through nineteenth centuries didn’t identify as capitalists or with capitalism, since the term didn’t even emerge until the late 1800s or early 1900s.4 Adam Smith’s Wealth of Nations, published in 1776 and widely considered to be a foundational treatise on capitalism, never mentions the term.

Does this mean that the solidarity economy can grow without a self-conscious identification with the framework and vision? Not exactly. I believe we need at least a critical mass across different sectors to self-identify with the solidarity economy, in order to build beyond the siloed activities that we are currently observing.

Many of these solidarity economy practices have existed in different guises and to a greater or lesser extent throughout the course of human history. These practices have persisted despite the tendency of capitalism to marginalize or co-opt them. So, the mere existence of SE practices does not in and of itself lead to system change. Just as the seeds of the imaginal cells lie dormant within the caterpillar, it is only when their self-identification as a different creature is triggered that they are able to start finding each other, coming together, cooperating, and integrating to emerge as a butterfly.

2. Recognizing others as sharing a common vision, and clustering

Once there is self-identification with the solidarity economy, it becomes relatively easy to recognize SE practices in other sectors. This facilitates clustering, which allows for practical/mutually beneficial partnerships. There are many examples of limited clustering between two or three SE practices—for example:

So, we can see that the imaginal cells of the solidarity economy are already clustering, but what will it take to get to the next stage of creating the connections between existing and emergent SE elements and giving birth to a new postcapitalist system? In the United States, there are emerging efforts to build local SE ecosystems through cooperating and integrating. For example:

There are a number of sectors, some quite sizable, that in general are quite distant from self-identifying with the solidarity economy and the principles upon which it was founded. But there is enormous untapped potential to activate dormant imaginal cells of the solidarity economy—for example:

The entrenched powers fear that if the California Grange vision infects the other states, they will no longer be able to maintain power and control. They won’t be able to lead, because they lack the expertise and the progressive populism that the new relevancy demands.… Young people don’t want to join an organization that is run by a Good Ol’ Boy Network.15

The conflict is not over. A number of lawsuits and counter lawsuits are being fought out in court, but there are lessons here about the potential for new and younger members to disrupt the old boys’ network and push an organization to rediscover its radical roots.

What are other strategies that could motivate dormant imaginal cells to embrace a transformative vision?

The convergence of the multiple crises that we are facing today has created a rare opportunity to push for a new system beyond capitalism. There is a solid foundation of imaginal cells that already exist within the current system, and new ones are emerging all the time. Many already see themselves as part of a transformational process. These cells are increasingly connecting with each other and in some cases beginning to build explicit solidarity economy ecosystems. While there is still much more that needs to be done to achieve systemic clustering of SE’s imaginal cells, we are seeing the emergence via metamorphosis of a solidarity economy.

Emily Kawano is a cofounder of the US Solidarity Economic Network, codirector of Wellspring Cooperatives in Springfield, Massachusetts, and is a member of NPQ’s economic justice advisory committee.

More about: Economic JusticeSocial Movementssolidarity economyVisions & Decisions: A Look Back at 2021