In Baltimore as in Ferguson, Libraries Remained Open as Sanctuary 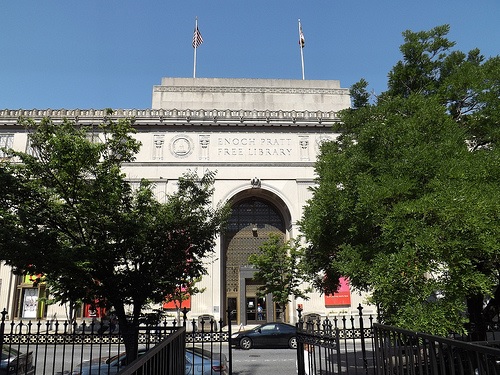 Months after the height of the Black Lives Matter movement, Baltimore has erupted into violent protest following the death of Freddie Gray, due to what appears to be another case of excessive police force. Yet in the midst of a city being torn apart, the Baltimore Library proves to be a beacon for the distraught community.

The 25-year-old Gray died two weeks ago in police custody, allegedly after an encounter with the city’s law enforcement left him with a severed spine. Untimely medical attention apparently resulted in Gray’s succumbing to his injuries. Reports coming out of Baltimore illustrate a scene similar to the events following the non-indictments in the cases of the deaths of Michael Brown and Eric Garner: rioting and looting following what was intended as a peaceful protest. Images show lines of police in riot gear and cars in flames. Others are reporting that rival gangs are coordinating together to create a united front against the police.

Despite Maryland being in a state of emergency, the city’s public schools being closed, and the cancellation of several recent Orioles games, all branches of Baltimore’s public libraries are open regular hours and remain fully staffed.

“It’s at times like this that the community needs us,” said the director of communications at the Enoch Pratt Free Library, Roswell Encina, to MTV News. “That’s what the library has always been there for, from crises like this to a recession to the aftermath of severe weather. The library has been there. It happened in Ferguson; it’s happening here.”

The library’s Pennsylvania Avenue branch appears to be centered in one of the hardest hit areas of the protests, including the area of the televised burning of a CVS pharmacy.

“We’re across the street from that,” Encina said of the deliberate fire. “We just want to show the folks we’re there for that community.”

The community and other libraries have been tweeting their support of the library’s commitment to the community. Across the country and world, libraries and library lovers have been showing solidarity through tweeting with the hashtag #whatlibrariesdo.

Just like Ferguson’s own library, which acted as an ad-hoc community center for the similarly unraveling town, Baltimore’s libraries have become a sanctuary of normalcy as more businesses and schools close. With the evolving role of libraries in communities, Baltimore’s libraries are fulfilling an essential and needed service beyond their book and CD collections. Cutting through what has become a much more difficult situation than was foreseen, the library is a symbol of resilience for the community.

“Everyone is doing their part,” said Encina. “There’s one little thing I saw—an older gentleman who showed up at the crack of dawn, just sweeping the streets, right there at that intersection where our branch is. If they can do that, we can, too.”—Shafaq Hasan