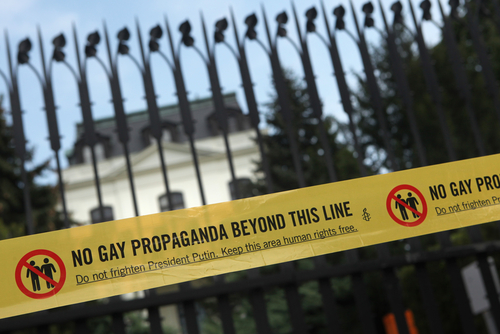 No shirts, no shoes, no heterosexual identity? No service.

Yesterday, Republican Indiana Governor Mike Pence signed the Religious Freedom Restoration Act into law, which would allow business owners to potentially discriminate against customers on the grounds that serving them may impinge their religious freedom. According to the bill, unless there is a compelling governmental interest, business owners in Indiana can refuse service to anyone that would violate their “exercise of religion.”

Gov. Pence explained the decision to sign the bill by referencing the Hobby Lobby lawsuit, in which the arts and crafts retail store chain won the right to exclude emergency contraceptives from its employees’ health plans due to the owners’ “sincerely held” religious beliefs.

Although the law does not use any language that makes reference to gay people, much of the media has speculated that the bill was written for the purpose of legalizing discrimination. However, Pence said, “This is not about any contemporary issue.” According to Pence:

“This bill is not about discrimination, and if I thought it legalized discrimination in any way in Indiana, I would have vetoed it. In fact, it does not even apply to disputes between private parties unless government action is involved. For more than twenty years, the federal Religious Freedom Restoration Act has never undermined our nation’s anti-discrimination laws, and it will not in Indiana.”

Pence and supporters of the law say the initiative is meant to curtail any governmental influence that could require individuals to operate in a way that violates their First Amendment right to religious freedom. “This was a measure that, frankly, Indiana should have enacted many years ago,” said Pence. “It gives our courts guidance about evaluating government action and puts the highest standard—it essentially says, if a government is going to compel you to act in a way that violates your religious beliefs, there has to be a compelling state interest.”

Indiana is one of twenty states with measures in place similar to the Religious Freedom Restoration Act. Currently, Indiana as a state does not have any laws prohibiting discrimination based on sexual identity; however, several counties within the state do. The law may allow business owners to circumvent these local laws and statutes. Eric Miller, head of Advance America (an anti-LGBT organization) and a socially conservative lobbyist, took to his website to give examples of how the law could be implemented. Among them, SB101 allows Christian bakers and florists to avoid baking wedding cakes or crafting floral displays for same-sex couples.

“We would never adhere to that bill. It’s 2015, not 1930,” said Adam Parquette, an employee at Designer Desserts, a bakery in Valparaiso, Indiana.

As anticipated, outrage over the bill spread within the state and around the country, as the supermajority Republican legislature passed the bill with a vote of 63 to 31 in the House and 40 to 10 in the Senate. Many of these reactions have commented on the potential financial impact of the bill. Gen Con, one of the largest and longest running gaming conventions in the country, has threatened to move the convention out of its usual venue in Indianapolis if the bill passed. Annually, the convention brings thousands of attendees to downtown Indianapolis. In a letter to Pence, the owner of Gen Con LLC, Adrian Swartout, wrote, “Legislation that could allow for refusal of service or discrimination against our attendees will have a direct negative impact on the state’s economy, and will factor into our decision-making on hosting the convention in the state of Indiana in future years.”

(Following the decision, Swartout wrote a second letter, clarifying that if Gen Con were to move to a different city, it wouldn’t be until after their contract with the city ran out in 2020 and encouraging registered con-goers to support open-minded Indy-area businesses in the meantime.)

The Disciples of Christ, a Protestant denomination, has similarly threatened to move its own event out of the state’s capital, citing the discriminatory nature of the law: “Purportedly a matter of religious freedom, we find RFRA contrary to the values of our faith—as well as to our national and Hoosier values. Our nation and state are strong when we welcome people of many backgrounds and points of view. The free and robust exchange of ideas is part of what makes our democracy great,” said the Church in an earlier letter urging Pence to veto the bill.

The Republican mayor of Indianapolis, Greg Ballard, also objected to the bill for the reason that it would financially impair the city. “Indianapolis strives to be a welcoming place that attracts businesses, conventions, visitors and residents,” Ballard said Wednesday in a statement. “We are a diverse city, and I want everyone who visits and lives in Indy to feel comfortable here.” Locals in Indiana have started displaying stickers that read “This Business Serves Everyone” to show their opposition to the law. (For more on this program, read Ruth McCambridge’s newswire by clicking here.)

The nonprofit sector has expressed its own criticisms of the bill. The president of the American Civil Liberties Union of Indiana, Jane Henegar, had some sharp, but deliberate words: “The timing of this legislation is all important to understanding its intent; the bill was introduced as a backlash reaction to achieving marriage equality for same-sex couples in Indiana.”

Freedom Indiana, a coalition formed in response to the bill, said, “We’re proud of everything that was done to sound the alarm on this dangerous bill, and we’ll do everything we can to make it clear that our state is not the kind of backward place this law makes us look like. But the damage has been done, and it’s a real shame.”—Shafaq Hasan