Is NYC’s DeBlasio Really a Threat to Nonprofits? Or to the Status Quo? 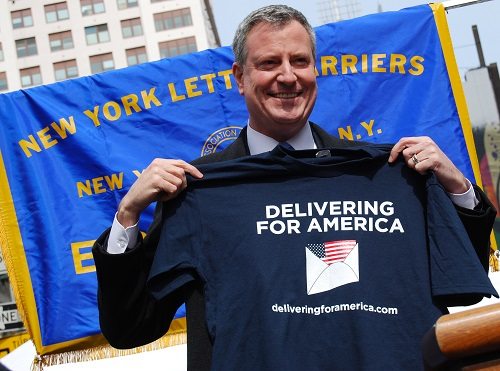 Some nonprofits in the nation’s largest city are worried about the probable election of Bill de Blasio as New York’s next mayor because of his potential impact on philanthropy and social service providers there, and two recent media pieces are a reflection of that. But I might add that the operating word in that last sentence is “some.” DeBlasio has strong ideas on many topics, such as charter schools, as NPQ has reported previously, and the mayor of New York has an outsized influence on funding for the local nonprofit sector as well as on public policies that impact them. But does he pose a threat to the nonprofit sector, or to the status quo of the nonprofit sector, and to whose benefit? We’ll be interested to hear from our colleagues in New York on the matter.

“‘This is why we can’t have nice things,’ New Yorkers might have muttered when they heard the news: Bill de Blasio, a shoo-in to be elected mayor next month, supports a plan to gut one of New York City’s most successful policy innovations of the past three decades,” says Evan Sparks in a blog post on the Weekly Standard website, entitled “Would-Be New York City Mayor Would Gut Central Park.”

Sparks is a contributing editor at Philanthropy magazine. He is referring to de Blasio’s support of a plan to redistribute money from Central Park’s operating budget to other, smaller parks throughout the city, not by moving money around within the city’s parks budget, but through a proposal “to raid the assets of the private nonprofit group that runs Central Park.” This was previously reported upon in another NPQ newswire.

The proposal is a state senate bill that would create a new “Neighborhood Parks Alliance” to redirect money to city parks considered neglected. The money would come from management conservancies like the Central Park Conservancy, the High Line, and other private conservancies with operating budgets over $5 million, who would be required to surrender 20 percent of their operating budgets. Sparks doubts the plan to seek funding from private, nonprofit groups would pass constitutional muster, but if it did, he says the result would be “dreadful for all parks—and philanthropy—in New York City.”

The Central Park Conservancy took on the task of reversing decades of physical neglect and social decay in the 1970s. The idea was that Central Park needed more than contributions from rich Manhattanites; it also needed new management, independent from the city’s parks bureaucracy. The conservancy was eventually awarded a long-term contract by the city to manage the park—the city pays a management fee to the conservancy and provides public safety, while the conservancy raises the large majority of its budget and employs 90 percent of the park’s staff. Everyone acknowledges that Central Park has been transformed by this arrangement.

The Central Park Conservancy inspired similar efforts throughout the city and across the country, especially for center-city parks with historic landmarks, complex landscaping, athletic facilities, performance venues, zoos, food and beverage services, etc. Conservancies are also good at generating funds and interest, and most park advocates say that the conservancy model has supported a renaissance of urban green space. Donors have come through in big numbers, and Sparks says that money has become a target for de Blasio, who has been quoted as saying that “some of that has to be moved to where the need is greatest, in neighborhood parks that are really suffering.”

Sparks and others don’t think de Blasio’s plan will work; he says Central Park attracts donors because it serves so many people from so many walks of life, and people want to give to a particular park. He calls the proposal “a tacit 20 percent tax on all gifts to New York’s big park conservancies.” He also calls it “an assault on the principle of philanthropic freedom—the liberty that all Americans have always enjoyed to choose the objects of their private giving.

By endorsing this plan, de Blasio is substituting his policy preferences for the charitable choices of thousands.” He also thinks the parks bill would cut off future conservancy efforts, something a number of conservancy leaders agree with. But, open space equity advocates from those neighborhoods with “suffering” parks support the idea.

Meanwhile, Adam Dickter, assistant managing editor of New York’s Jewish Week, delves into de Blasio’s track record with issues of interest to the Jewish community, particularly the ultra-Orthodox, who comprise a growing proportion of the city’s Jewish population, both in terms of numbers and influence.

“A Mayor de Blasio, the first Democrat to hold office since 1993, will also encounter pressures from Jewish groups based on campaign positions he’s taken,” said the article, continuing that “others will remember his support for day care vouchers, eliminated by [outgoing Mayor Mike] Bloomberg, that have heavily assisted large struggling Orthodox families. He has also said he’d be open to ways of helping religious and other private schools get more public funding, if it doesn’t conflict with the law.”

Social service organizations all over the city will be looking at how their contracting processes may change. The Bloomberg administration’s strict businesslike regulations regarding contracting with the city rankled Latino nonprofit leaders (NPQ had a newswire on this matter, as well).

But the paper reports that de Blasio is a major critic of the councilmember earmarking process for specific organizations because of corruption, and has called for that system to be scrapped. How that plays out depends on who becomes the Council’s next speaker. This uncertainty is causing anxiety within the Jewish social service network at a time when some programs have been frozen because of a state probe of misappropriated funds at the Metropolitan Council on Jewish Poverty.

One Jewish organizational leader told the Jewish Week that he hoped an alternative to scrapping member items could be found that also addressed the corruption concerns, with more accountability and transparency. The city’s nonprofits will certainly get into the mix over earmarks, as they should. Both articles illustrate the fact that the fortunes of the nonprofit sector and a community’s political leadership are often joined at the hip, but we would love to hear from NPQ readers who are DeBlasio watchers in NYC. What are your thoughts on his positions, and what his candidacy and probable win means for NYC nonprofits?—Larry Kaplan