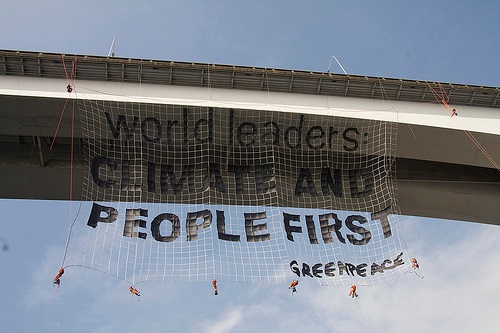 Greenpeace’s mission is to use a variety of methods to “expose global environmental problems and to promote solutions that are essential to a green and peaceful future.” While these methods, called direct action, usually might involve chasing oil tankers or sitting in historic trees, now forty Greenpeace employees have waged a direct action against their own senior leadership.

In a letter to leadership, staff members stated, “Every time we criticize politicians or companies, this story will come back, as we are already experiencing. Campaigners are getting questioned by companies and politicians. If Greenpeace does not walk the talk, why should others do so?”

The issue to which staff is responding is that Greenpeace’s International Program Director, Pascal Husting, was given permission to use air travel to commute, regularly taking a plane from his home in Luxembourg to work in Amsterdam. (As the uproar ensued, Husting agreed to take the train, although he has not as of yet.)

This is the latest in a series of challenges that have befallen the environmental rights giant. As described in leaked internal documents given to the Guardian, the organization is “beset by personnel problems and a lack of rigorous processes, leading to errors, substandard work and a souring of relationships between its Amsterdam headquarters and offices around the world.”

Kumi Naidoo, Greenpeace’s executive director, “admits that internal communications are a ‘huge problem’ and staff have ‘good reason’ to be upset at a range of problems.” An example of these internal communication issues can be seen through the tensions in the Husting case. Naidoo has said that Husting “hasn’t got much of an option until he can move. He wishes there was an express train between his home and his office, but it would currently be a 12-hour round-trip by train.” In response, the staff states that Naidoo does not “seem to grasp how public opinion works and does not seem aware of the magnitude of the long-term reputational damage that has been caused by commuting by plane and the chosen media response.”