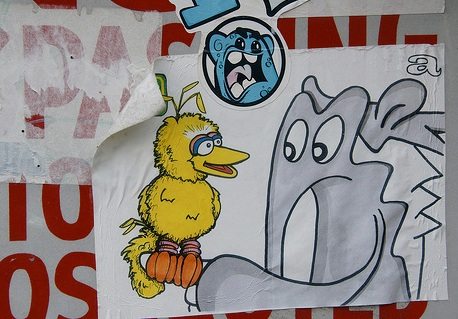 President Barack Obama may not want to see Big Bird’s funding cut, as former Massachusetts Gov. Mitt Romney does, but his reelection campaign may have just done something that could also be harmful to the giant yellow resident of “Sesame Street.” It further politicized him. In a new campaign ad, Obama attacks Romney for blaming the economy’s woes on “Sesame Street” instead of greed on Wall Street. You can watch the ad here:

As NPQ recently noted, “Sesame Street” is produced by the Sesame Workshop, and the Seattle Times reports that it is not happy about this turn of events, releasing a statement saying, “Sesame Workshop is a nonpartisan, nonprofit organization and we do not endorse candidates or participate in political campaigns. We have approved no campaign ads and, as is our general practice, have requested that the ad be taken down.” In response, a spokesman for the Obama campaign said that they are looking over Sesame Workshop’s concerns.

That Romney brought up public broadcasting in a discussion of trimming the budget deficit is almost laughable, given that the Corporation for Public Broadcasting, which funds PBS, NPR, and other public media, receives a grand total of .00014 percent of the federal budget—not exactly a big cost savings to the American people even if you cut every cent of public broadcasting’s federal funding. That Obama has now latched onto this oddball debate moment may have tested well among some focus groups, but it’s doing “Sesame Street” wrong. The Obama campaign should immediately agree to Sesame Workshop’s request and take the ad down. Big Bird is one of America’s most beloved cultural symbols for people of all political beliefs. Big Bird is for everyone. –Mike Keefe-Feldman