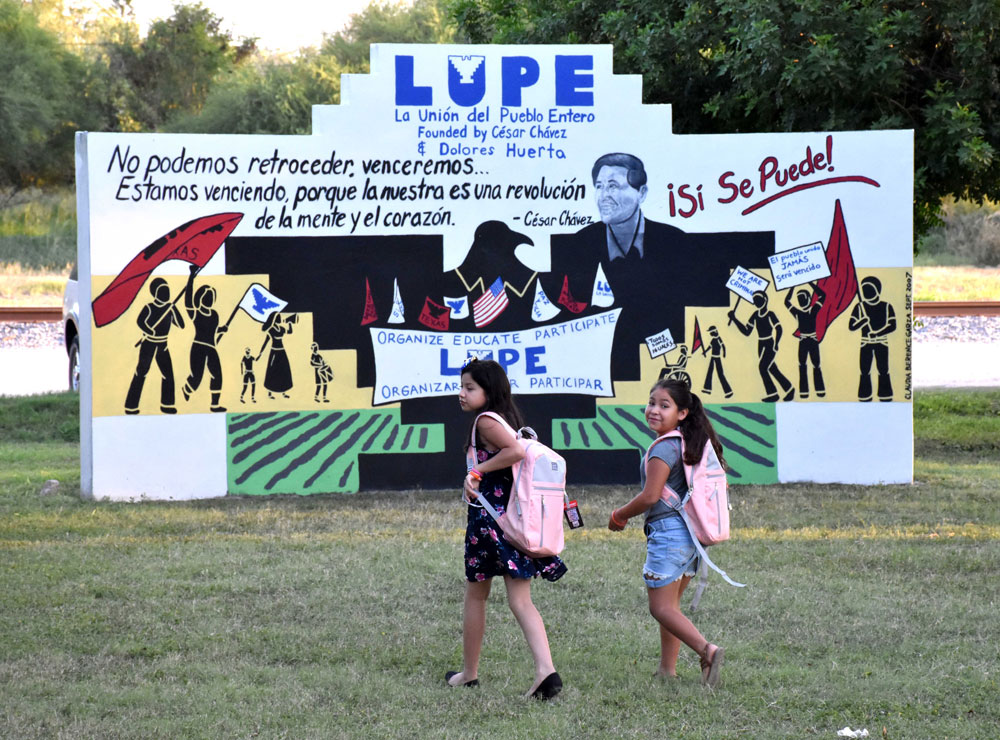 It was the second week in March when New York City, the city that never sleeps, shut down as it became the epicenter of the novel coronavirus in the US. As panic set in, it quickly became evident that predominantly immigrant and working-class communities were at particularly high risk.

Looking back, it felt like a war zone. If you lived in the Big Apple at the time, you will recall the endless sirens and wailing that would rise seemingly non-stop from the streets. Every day, we saw the stories in the news of being ground-zero for the spread of the virus and the devastating impact it was having among Latinx immigrant communities in the Bronx and Queens.

At the same time, nonprofit groups in New York and across the country were preparing for their on-the-ground operations to launch their door-to-door census and GOTV [get out the vote] campaigns. But these groups quickly shifted their efforts to provide immediate financial and other relief to their members and surrounding communities.

In March, Hispanics in Philanthropy (HIP), an organization that strengthens Latinx leadership, influence, and equity by leveraging philanthropic resources into impactful investments for the community, began to reach out to Latinx-led nonprofits to better understand their priorities and how strategies were shifting to conduct both direct relief and civic engagement efforts. HIP’s efforts targeted Latinx communities in urban areas like New York, but also prioritized support of Latinx-serving organizations in the South, in rural areas across the country, and in geographies with growing but underserved Latinx communities.

In the first weeks of the pandemic, many organizations like Latino Community Fund Georgia (LCF Georgia) were playing a balancing act by using their general operating funds to provide financial assistance to the community while also using messaging platforms like Hustle, WhatsApp, and Facebook Groups as tools to reach their members.

It was during conversations with LCF Georgia, as well as organizations like Mi Familia Vota, and Poder Latinx, that the degree of technological shift needed for outreach and mobilization—both for relief and civic engagement—became apparent to HIP’s staff. At the same time, Latinx organizations were challenged to achieve this shift without ignoring the major digital gaps that still exist in vulnerable, hard-to-count communities.

In Georgia, with a large number of young immigrant Latinxs, the LCF had the huge challenge of distrust of the government even before the pandemic. “When the economic relief package was passed and excluded mixed status families, including over 600,000 families in Georgia, the relevancy of the message became anger,” said Gilda (Gigi) Pedraza, LCF’s founder and executive director. “We had to pivot to develop new messaging connected to healthcare resources, hospital beds, highways, and internet connectivity to remain relevant.”

Prior to the pandemic, LCF was prepared to do outreach through partnering with schools, in-person events, canvassers, and a big investment on a media ad buy of billiards and TV ads covering the rural part of the state with limited internet access. But all those plans were affected by school closures and people staying home.

Héctor Sanchez-Barba, CEO of Mi Familia Vota, whose organization has operations in Arizona, California, Colorado, Florida, Nevada and Texas, used a variety of tools, including text messages, phone calls, digital, radio, and TV ads, to highlight the urgent need to continue supporting organizations on the ground who lack these resources. As he describes, “The pandemic has been a game-changer in the way in which frontline organizations conduct civic engagement outreach, times of challenges represent opportunities too and we are embracing all the new technologies to make our democracy more accessible.”

While limited in capacity, some nonprofits are still putting boots on the ground (at a very high cost) so they can reach out to the most vulnerable. LCF has hired a team of four navigators to cover a rural part of South Georgia in order to do in-person outreach and provide agriculture workers with financial assistance and information about the census.

Now, we stand less than 30 days before the presidential election. Latinxs are poised to play a pivotal role with a record-setting 32 million eligible voters, according to Pew Research Center. For the first time in our nation’s history, Latinxs will make up the nation’s largest non-white voting bloc. It also matters where they’ll be casting their votes—swing states like Florida, North Carolina, and Nevada.

But unfortunately, COVID-19 is putting Latinx political power in jeopardy. In 2018, Latinx voters made history by having the highest turnout rate for a midterm election in recent history. Today, it is a race against time, and the impact of COVID-19, coupled with the threat of looming deportations by the Trump administration, is pushing civic organizations to make sure not only that every member in their community is counted, but also that those who are eligible make plans to vote.

A slight boost in voter turnout could help swing the election, especially in four competitive states where the Latinx voter share is particularly high: Texas (30 percent), Arizona (24 percent), Florida (21 percent), and Nevada (20 percent). Reaching these Latinx voters depends on the use of technology and platforms organizations have available to them to mobilize a quarantined and underserved community.

The shift in supporting digital outreach tactics and platforms plays a pivotal role in engaging Latinx voters, as the digital divide continues to be a problem for underserved Latinx communities. Today, more Latinxs are using the internet, but many still lack full access to broadband or Wi-Fi technology to receive or consume media. Still, Latinx communities are early technology adopters, especially on platforms such as Spotify, Facebook, Instagram, WhatsApp, TikTok, and Snapchat. Latinx streaming audio and video consumption also is greater than in Black and white communities, as many connect to these platforms via their mobile devices. Pew’s research shows that the Latinx population is largely gaining internet access, but only through smartphones. In fact, 80 percent of Latinxs access the internet through their smartphones.

With this critical distinction, organizations in key battleground states have shifted their strategies to upgrade technology and information infrastructures that can adapt to the needs of the community and serve as responsive technology, based on the platforms their members and the community already use, such as peer-to-peer messaging, Facebook Messenger, and more.

Building the Civic Engagement Infrastructure as We Fly the Plane

For frontline Latinx-serving organizations to both tackle COVID-19 and build Latinx civic engagement has required considerable flexibility. The Latinx communities in southern states with whom HIP works made known their priorities, which were:

To help these communities, who are redefining in real time what person-to-person means, HIP has provided grants to partner nonprofits to help them achieve their goals. While technology has helped in streamlining daily outreach goals, civic engagement leaders warn against dismissing other traditional outreach efforts.

“As we pivoted our outreach plans from in-person to a virtual operation model, we knew of the importance to maintain some level of human interaction, such as a phone call, caravan, and food banks—especially at a time when we were told to social distance ourselves and many in our community were losing their jobs or getting sick,” said Yadira Sanchez, cofounder of Poder Latinx, a voter outreach organization with operations in Arizona, Florida, Georgia, and North Carolina. “We knew that our secret sauce was going back to the basics and understanding how people in our community felt more comfortable interacting with us.”

As a result, Poder Latinx, Jolt, the La Unión del Pueblo Entero (LUPE), and many other nonprofits have adapted multidimensional approaches that included both digital tools and a mix of phone banks, TV/radio ads, and even old-fashioned door-knocking by canvassers wearing masks. These efforts incorporate things like food banks as a way to respond to the immediate economic crisis, while also reminding people of the importance of getting counted for the census and of registering to vote.

Jolt, the largest Latinx civic engagement organization in Texas, has used its platforms to bring together young voters from across the Lone Star state by focusing on social issues like Black Lives Matter, DACA [deferred action for childhood arrivals, the “Dreamers” program], and the killing of Vanessa Guillen, a 20-year-old US Army soldier who was allegedly murdered, inside the Fort Hood, Texas, army base.

“We are harnessing the power of Latino culture to innovate and modernize what civic engagement looks like for a new digital generation of young Latino leaders,” said Antonio Arellano, Jolt’s interim executive director.

But outreach resources in the southern border of Texas’s Rio Grande Valley’s low-income colonias, where access to broadband internet is scarce, looked very different. They see the issue of connectivity as an issue of building a democracy that works for everyone.

“We know that if colonia residents are left out of the decision-making process, they will be left out of the solutions that politicians and county officials propose,” says Martha Sanchez, a LUPE community organizer coordinator.

LUPE has launched a campaign to bring accessible, high-speed internet to the Rio Grande Valley colonias. During the pandemic, as life-saving information was being made available online, residents in the Valley with little to no internet access were left in the dark. And as schools are still doing long-distance learning, parents worried that their children have fallen behind as they do not have adequate internet.

While the path is unclear on how to provide high-speed internet to residents, LUPE understands the power of organizing and is mobilizing the community by collecting signatures from local residents to add pressure to local elected officials.

“When we launched our colonias streetlights campaign more than a decade ago, we didn’t know exactly what the solution would be then either,” Sanchez added. And yet these efforts ultimately succeeded.

While the road ahead might be unclear for many civic organizations across the country, and the challenges are very different, one thing that the pandemic has amplified is the urgent need to continue to grow the support for internet accessibility as a way to bring democracy to communities across the country. The struggle may be great, but Latinx communities, Sanchez reminds us, have regularly refused to take “no” for an answer.

Sonia Melendez Reyes is associate director of policy and engagement at Hispanics in Philanthropy (HIP). Prior to joining HIP, she was deputy communications director for EMILY’s List and previously served as a communications adviser to US Secretary of Labor Hilda Solis.