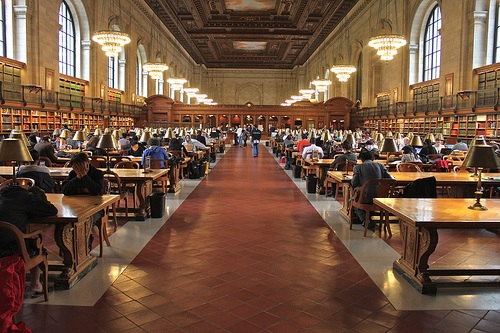 Last week, two separate events brought attention to the precarious place of public libraries in various parts of the country. In Missouri, a group of about 100 students traveled by bus from Kansas City to Jefferson City in the hope of meeting with the governor to relay their dissatisfaction with his proposed $6 million budget cut to the state’s library system. In New York City, the presidents of the Brooklyn Public Library, Queens Public Library, and New York Public Library issued a joint report, “Long Overdue: NYC’s $1 Billion Library Fine,” to draw attention to the terrible physical condition of many of the city’s libraries and the jaw-dropping price tag to repair them. Although the Missouri campaign seems to be mostly student-driven while the NYC campaign is broader, they both are relying heavily on social media to generate discussion about the multiple roles that libraries hold for students and adults and the need for more stable funding sources to support them.

The Save Missouri Libraries homepage provides a powerful list of the adverse effects a library budget cut would have on ongoing statewide programs, with an impact on summer youth programs, afterschool programs, support services for job seekers, as well as programs to support rural residents of all ages. As an offshoot of this campaign, the KC Library Teens Facebook page boasts not only 465 “likes” but an array of photos of students posing in front of the state capitol during their visit last week and a few select shots of students with signs such as: “Without Libraries What Have We? We Have No Past And No Future!” In spite of this planning, however, the much-anticipated meeting with the governor never actually took place because the group was asked to leave the office. As part of their reporting on the story, KCTV cited Kansas City Public Library Executive Director Crosby Kemper’s own Facebook post that he “had never been treated like that in…54 years in active politics.”

In an introductory letter introducing the New York libraries report, the presidents and CEOs of the New York, Brooklyn, and Queens Public Libraries explain, “We present this report as an urgent appeal for long-overdue city action on the staggering infrastructure crisis in our branches.” Highlighting the current maintenance crisis with a bulleted list of ten points, including cooling and heating problems, out-of-order bathrooms, ADA inaccessibility, and overcrowding, the report then devotes a single page to each issue area along with examples from a specific branch library and an accompanying boxed story of a library staff person or “local hero” who has been creatively working around the problem at hand. The homepage for the New York City Library campaign, “Invest in Libraries: Invest in New Yorkers,” also has a Twitter feed, a link to Facebook, and a letter center where supporters can draft and send letters to their own city leaders.

In Missouri, Governor Nixon’s 2016 budget request is complete, but the story of the Kansas City teens is still getting noticed by media sources, including the Missouri Times, the Moberly Monitor-Index, and even Fox News, and so could still draw the attention of a state legislator. Citing a spokesperson for New York City’s mayor, Bill de Blasio, the Wall Street Journal reports that New York City has increased annual operating funds for the city’s three public library systems by $22 million and an updated capital plan for the system is likely to be part of the executive budget that will be unveiled this spring.

Building on what seems to be strong demand in past years, this year, edX is again offering the online class “Library Advocacy Unshushed.” Led by a Canadian institution, the University of Toronto, the examples from Missouri and New York City suggest that the class not only has clear relevance for U.S. institutions but also that the Kansas City Library teens might serve as excellent online speakers in the future.—Anne Eigeman