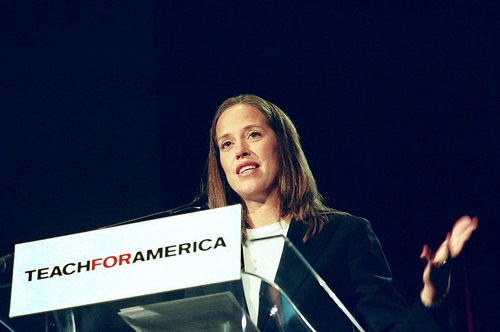 A note being circulated by Teach for America officials to their partner organizations reveals concerns about declining recruitment numbers for TFA.

The memo, sent by Matt Kramer and Elisa Villanueva, who are co-Chief Executive Officers at TFA, indicates the organization expects to fall as far as 25 percent short of the anticipated needs of their partners, perhaps as a result of the backlash received by the teaching nonprofitabout its work and even its basic premise over the past several years:

“At this point, we’re tracking toward an incoming corps that may be smaller than the current one, and because demand for corps members has grown in recent years, we could fall short of our partners’ overall needs by more than 25 percent. We understand that this has very real implications for you and your students, and though we’ve still got nearly half our recruitment season to go, we wanted to keep you in the loop.”

Among the reasons the officials give for the subpar recruitment season is the teaching profession’s decline in the aftermath of the recession, resulting in the loss of promising candidates to more profitable fields. “Having experienced the national recession through much of their adolescence, college graduates today are placing a greater premium on what they see as financially sustainable professions,” say Kramer and Villanueva. “Teaching and public service have receded as primary options.”

Last week, ChalkBeat reported on TFA’s issues recruiting in New York City, having had to close their training center in New York “in the midst of a challenging recruitment year,” according to Charissa Fernandez, the executive director of TFA in New York. The city has seen firsthand the organization’s shrinking presence, down 400 teachers this year from 536 teachers in 2008.

While TFA’s decline in recruitment is only mirroring the decline of the teaching profession itself, many would also say their employment model is contributing to that decline. The program’s structure asks participants to commit two years to the program with a maximum required five weeks of training, leading to many of the concerns that resulted in Pittsburgh and later Durham being the first school districts to decline to renew their contracts with the TFA.

Colorado public schools expressed concerns about whether corps members were diverse enough to be working in their communities. Others complain the organization takes jobs away from veteran teachers with more experience and perhaps better skills and replaces them with TFA participants who will work for less.

Part of the solution for TFA is to optimize their outreach because “college seniors want to hear personal perspectives from those immersed in this work.” They suggest in their memo that these partner organizations should help spread the word, either through op-eds or by becoming recruiters to join the efforts themselves and improve recruitment.

Unfortunately, along with that positive press from alumni, TFA will also attract stories from unhappy participants like Erin Nolan, who had the experience many of us would expect from an inexperienced teacher being placed in a challenging, low-income community. “I was miserable,” she said. “I was in a position where not only was I feeling incompetent every day—my incompetence was hurting the lives of children. So it was a heavy burden. It’s something where no amount of hard work I could do would fix it because I was so paralyzed by anxiety and discomfort and stress and sleep deprivation…I didn’t make forward progress.” With 173 students, Nolan left the program after six months, overwhelmed by a job for which she felt she had not been prepared following the summer training session.

Nolan’s experience is not singular, and many others have reported feeling the same way. Perhaps as a result of these criticisms, Kramer and Villanueva have begun piloting two new initiatives: one would allow 2,000 undergraduates who applied early decision to extend their five-week training into a year-long education program; the other would provide participants continued support and training in their third through fifth years of teaching. However, neither program would require the participants to commit beyond the initial two years of their service.

As both the teaching profession and TFA continue to decline, before these partner organizations invest their time and energy to help the nonprofit revive its recruitment numbers, they must ask: At what price? Is the TFA model is worth saving? Or should we let it sink?—Shafaq Hasan