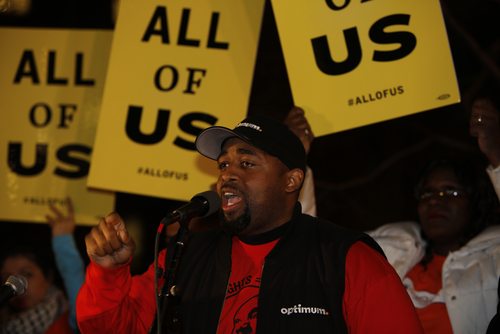 In an op-ed piece in the Seattle Times, an area nonprofit leader has pointed out the unintended consequences if efforts to increase the city’s minimum wage succeed.

“Capturing the complexity of raising the minimum wage is difficult. As a nonprofit leader who is concerned with social justice, I’ve lost many nights of sleep considering this issue,” says Sylvia Fuerstenberg, executive director of The Arc of King County, which provides support to families and people with intellectual and developmental disabilities.

“How can we build a more just and equitable community without bankrupting the organizations that help our most vulnerable?” she goes on to ask.

Her concern is what may happen if the city of Seattle raises its minimum wage from $9.32 to $15 an hour. An advisory committee appointed by the mayor is considering the proposal and is expected to recommend changes at the end of April. Seattle is not alone; similar measures are being discussed in Washington, D.C. and Los Angeles, not to mention a number of states.

Fuerstenberg notes that support for a minimum-wage increase is spreading, with public opinion overwhelmingly in support. She agrees with the need and the moral imperative, but is concerned about the timing and planning of the implementation. Her case in point is her own agency.

Since 1936, The Arc of King County has provided supports and services to individuals with intellectual and developmental disabilities and their families, as a community-based alternative to institutionalization. It currently has 77 employees.

She says that increasing the minimum wage to $15 per hour across the board immediately “is extremely problematic for supported-living providers.” That’s because the funding for her agency’s services is appropriated by the state legislature, matched with federal Medicaid funds, and allocated to hours of service (fee-for-service).

“As a result, providers are limited in how much we can pay employees. We cannot simply raise prices to meet a new minimum wage,” she points out, explaining that in Seattle alone, supported-living providers would need an additional $8 million in funding a year to provide the same level of service at the new wage. And because her agency has a regional footprint, she says it would be difficult to pay different wages depending on which city employees worked in, and would raise wages regardless of where they worked. That would mean that service providers in King County (primarily the Seattle metro area) would need an additional $26 million.

That funding, she says, is not necessarily forthcoming. “If the minimum wage increased to $15 today, my agency alone would immediately need almost $500,000 to cover the increase. That’s money no one is offering—not the state, county or city. Because we’re contracted by the state to provide specific hours of service [at a specific contracted amount], we can’t reduce service hours to [offset] increased wages.”

She writes in the Times that raising the minimum wage would also force her to raise wages further up the chain because doing so for lower-level workers without a similar increase for those higher up is perceived as a reduction for them: “Employees with higher responsibilities will not continue performing well if they are paid the same rate as the people they supervise.”

Fuerstenberg does not support exemptions for nonprofits and small businesses because she worries that trained employees would leave the field in search of higher-paying jobs. Turnover in the sector is already high at 32 percent, which is disruptive to clients and incurs high training expenses for service providers.

“Raising the minimum wage is an emotional issue. But the rhetoric must match reality…. We cannot achieve shared prosperity by passing a plan that risks putting nonprofits out of business, leaving vulnerable citizens without support,” she writes.

She supports raising the minimum wage to $15 in stages, taking into account employee retention factors. In addition, she writes that such an increase “must be phased in to give time for the legislature to adjust,” so that it can account for benefits and consider temporary training wages to preserve opportunities for those with fewer job skills.

Fuerstenberg does not specifically mention the most important thing any political leader has to consider, and that nonprofit leaders must advocate for—that government funders must also adjust their appropriations and grants to reflect the greater obligation that community-based nonprofit fee-for-service providers will be taking on with a higher minimum wage. In short, it cannot be an unfunded mandate.—Larry Kaplan