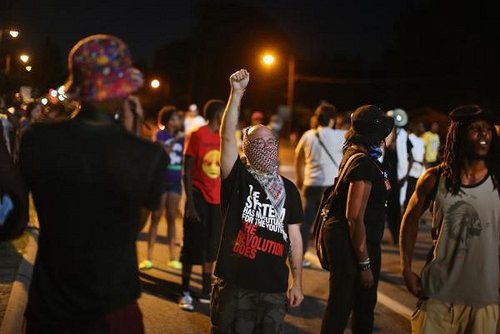 From the point of view of a former community organizer, the strategy for those who have organized rallies or advocacy events is to build momentum and awareness that can help push the cause forward. Often, this momentum and public awareness is short-lived.

Over a month ago, an unarmed, 18-year-old, black teenager named Michael Brown was gunned down in Ferguson, Missouri. The case reached communities all over the world, shining a light not only on the tensions between the black community and law enforcement, but also onto the militarization of local police forces and America’s ongoing struggle with race relations. Ferguson, a small suburb of St. Louis, was in the eye of the world. A couple of weeks later, according to ColorLines, a daily online newspaper from Race Forward, a national organization that advances racial justice through research, media, and practice, the “national media are gone and the police have stopped making drama with tanks, tear gas, and rubber bullets.”

What is different from most events like this is that people are still coming to Ferguson to show their support and to protest. People are not only coming from nearby, but from cities and communities thousands of miles away. According to Akiba Solomon, the article’s author, she joined “journalists, lawyers, medics, organizers, pastors, students, tech experts and videographers…More than 500 of us have traveled from Boston, Chicago, Columbus, Detroit, Houston, Los Angeles, Nashville, Portland, Tucson, Washington D.C., Winston-Salem and other cities to support the people of Ferguson and help turn a local moment into a national movement.”

Michael Matlock from nearby St. Louis stated, “I couldn’t sit back on the sidelines; no more posting and tweeting…. This is the biggest thing I done seen since the Million Man March. We need to be out here supporting.” Lynetta Hayes, also from St. Louis, thinks about the treatment of her nephews by the police, stating, “They’re the same age as Michael Brown and they’re right here in this community…This could have been anyone, any one of our nieces, nephews, any one of our children.”

The effort was organized by a group called Black Lives Matter and funded in part by social media fundraising through the online site GoFundMe. Black Lives Matter is not an organization but, according to its Facebook page, a “forum intended to build connections between Black people and our allies to fight anti-Black racism, to spark dialogue amongst Black people, and to facilitate the types of connections necessary to encourage social action and engagement.”

The efforts of BLM have included congregations and families with children. Solomon describes the event she attended as peaceful and well organized, with leaders breaking everyone “into groups according to area of expertise and [planning] at least three local actions we will take. Deadlines are assigned and leaders assure us that we will have accountability partners to ensure that we do the work.”

As the author rode home with her bus-mates, they took “a group photo with…hands up, the now-universal sign of resisting police and vigilante violence.” Ferguson for many will not be the typical march, but one that has real staying power.—John Brothers