N.Y.’s New Mayor Hears from Some of the City’s Nonprofit Leaders 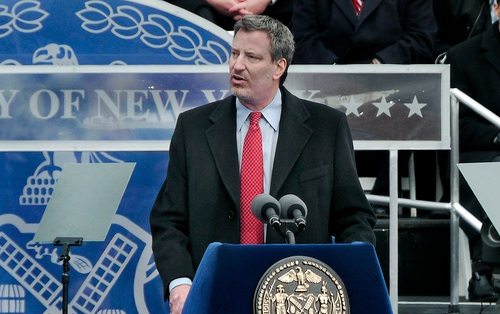 New York City’s newly elected mayor, Bill de Blasio, will have to mend a few fences, use some friendly persuasion, and listen attentively to some nonprofit leaders who range from unhappy to agnostic about him. However, it’s safe to say that much of the City’s grass-roots organizations are in synch with his politics—de Blasio ran a successful campaign focused on the dramatic income inequalities found in New York, a city that is becoming increasingly expensive and challenging for the less affluent.

For the first time in 20 years, Democrats will control both the executive and legislative branches of city government, ushering in what the Wall Street Journal says will “be a new era of left-leaning policies in the nation’s largest city.” Most of the concern expressed in the nonprofit community seems to be coming from more mainstream charities and traditional philanthropists.

Columnist Howard Husock writes in a sharply critical piece in Forbes Magazine “that the [prospect that the] government might have a say in how private donors direct their charitable contributions is a sharp, even stunning, departure from the American tradition of independent philanthropy.”

Husock focuses on de Blasio’s support for a policy regarding private donations to the nonprofit conservancies that manage a number of the city’s most famous parks, including Central Park. (NPQ addressed this last week.) Husock says such a policy “would threaten the future of charitable giving while falling short in its goal of improving the quality of less-celebrated neighborhood parks.”

“Worse still,” he goes on, “it’s a destructive, leveling impulse which is all too common among those who, like de Blasio, view inequality as our most pressing social problem. Whether with parks or charter schools…the attack on private giving implies that inequality is so great an injustice that mediocrity, shared equally, would be preferable.”

De Blasio—who won in a landslide on Tuesday—has endorsed state legislation that would require a portion of donations to be re-directed to a citywide park conservancy, which would provide help to less-famous, less well-maintained parks in poorer neighborhoods.

“First, there is the fallacy that support for Central Park comes at the expense of other parks. In fact, it’s just the other way around. Private support for major parks frees government to focus the money it spends on other parks,” says Husock, also adding, “there is the fallacy that taking decision-making out of the hands of private donors would not inhibit future philanthropy.”

Husock says these “fallacies” are based on the idea that the success of some institutions, or some individuals, comes at the expense of others, a view he says is implicit in de Blasio’s “antipathy” for charter schools. He says the idea gets government involved in the overall direction of philanthropy too heavily, a viewpoint expressed by other conservancy supporters. At the same time, some groups representing low-income communities heartily welcome the spreading of the wealth.

The new mayor will surely get an earful of advice as he embarks on his transition to office (he takes the oath on January 1). On the City Limits website, Marilyn Gelber says New York’s new mayor must “embrace philanthropy.” Given the amount of criticism he has received for his parks proposal, de Blasio needs to embrace some philanthropists, as well.

Gelber points out that outgoing mayor Michael Bloomberg welcomed New York City’s philanthropic sector in an unprecedented way. The Mayor’s Fund to Advance New York City and the Fund for Public Schools solicited millions of dollars in charitable and corporate contributions, with the mayor himself using part of his personal wealth to augment the budgets of the city’s cultural institutions and to start new public private initiatives. City agencies created their own foundations and some stepped up their efforts to attract private donations.

Unlike Bloomberg, de Blasio will not be able to leverage his personal wealth to encourage others to give in support of his pubic goals, says Gelber. But she says “it would be a serious error for the next mayor to fail to thoughtfully engage with New York’s philanthropic sector, particularly during a time when the role of government keeps getting redefined downward, and we continue to face significant challenges that come with persistent poverty in many neighborhoods across the City.”

She advises the new mayor to engage big philanthropy as it extends its interests and investments into the public policy arena—charter schools, healthcare and other safety net services, immigration reform, employment and training, environmental policy, criminal justice services or other critical areas.

“Philanthropy has much to offer in its ability to take risks and its continuing investment in research and program development,” Gelber says, acknowledging that public spending “dwarfs” philanthropy, adding that “opening up fresh channels of communication and learning between the multi-billion dollar philanthropic sector and the new administration in City Hall could make a real difference in addressing the challenges of income inequality, uneven educational achievements, and environmental issues related to climate change.”

She says de Blasio can build on Bloomberg’s philanthropic legacy and take it further, rethinking the use of the Fund for Public Schools and Mayor’s Fund to Advance New York City to focus on place-based strategies in neighborhoods to advance ideas and projects developed by local nonprofit leaders with the help of the philanthropic sector.

“The next mayor has a wonderful opportunity to build on Michael Bloomberg’s relationship with the philanthropic community by bringing a fresh, neighborhood-centric, community minded approach to giving.”—Larry Kaplan