The New Lives of Old Motels in Southern California 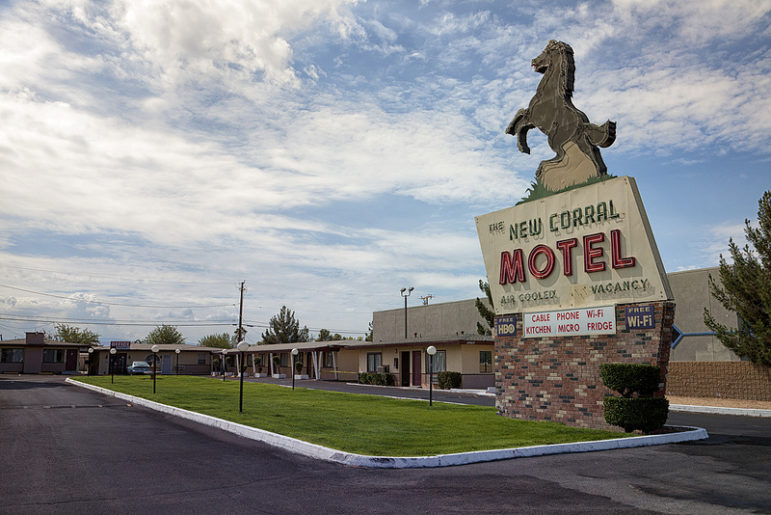 The building of prototype motels began in the 1920s, following the popularity of motorized vehicles. The number of roadside motels grew rapidly, peaking in the early 1960s with 61,000 across the U.S. California is significant in motel history; it hosts both the site of the structure that gave them their name and the Santa Monica Pier, which ends the historic auto trail, Route 66. By the early 1980s, family vacations changed and motels began to close down, blighting neighborhoods. Some individuals have taken a look at those shuttered motels and created hope.

The Fiesta Motel in North Hollywood was converted into a homeless shelter in the late ’80s by a coalition group of religious leaders eager to find a safe place for the burgeoning homeless population of Southern California. The Valley Interfaith Council put together the $2.2 million to buy the Fiesta in 1986, but after a short period of time realized they did not have the funds to run it. The leaders asked a nonprofit, the Los Angeles Family Housing Corp., to step in. In five years, the homeless facility’s services expanded from just a bed and a meal to counseling, medical care, and a package of support services. Today, the L.A. Family Housing nonprofit (LAFH) runs 20 properties for the homeless and transitioning individuals and families. Each year, LAFH helps more than 5,000 people transition out of homelessness and poverty.

The Fiesta was demolished last week, but the new 80,000-square-foot complex next to the former site will now do much more. Besides taking on the 250 beds from the motel, the center will provide health services in an onsite clinic, administration offices, a walk-to area for social services, and permanent housing for 50 individuals/families transitioning from the shelter. Programs provided include those targeted toward veterans, legal and mental health services, and job training.

Old motels can also be used to rehab patients after release from a hospital. In 2008, a hospital was charged with “dumping” a homeless patient with a colostomy bag to the sidewalk. A spotlight was turned on overlooked ill people with nowhere to go to heal. Along came Paul Leon, with an idea to turn abandoned motels into safe recovery facilities for the homeless.

Homeless individuals who are released after surgery or illness often do not obtain needed medication, cannot access appropriate food for their condition, or have a variety of complications. They resort to the hospital’s emergency department, which is an expensive alternative when what they really need is a clean place to rest with access to nursing services for things like changing bandages, dispensing medication, and removal of stitches. Leon envisioned a centrally located triage space for intake and separate rooms for patients. He found it with the Coral Motel in Buena Park.

The Coral had become the site of prostitution and illegal drug transactions.  Converting it to a recovery center was not as expensive as building modern rehab centers, and it had the architectural bones for a basic center setup. A recovery room in the motel, with a nurse on duty to assist the patients, costs about half what the rehab centers would.

Leon, a trained public health nurse, established the Illumination Foundation for homeless issues while he was attending the Healthcare Executive MBA Program at UC Irvine. With the IF Recuperative Program, he has created a successful alternative to the streets and the hospital emergency department. The nonprofit now has a half-dozen motel recuperation sites in four counties in California.  They treated over 2,350 patients from 2010 through 2015. The program has a budget of approximately $1.2 million and includes counseling towards breaking the homelessness cycle. Patients in the IF Recuperative Program have had 50 percent fewer hospital readmissions within the 90 day period after discharge.—Marian Conway